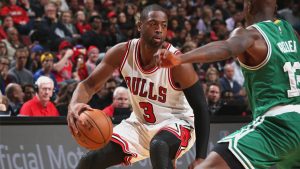 BOSTON — The Celtics and Bulls found another thing to argue about after Game 5 of their spirited first-round playoff series:

Was Avery Bradley more impressive on offense, or on defense?

“Everyone knows he’s a good defender. Tonight, he got his offensive game going,” Chicago’s Dwyane Wade said after Bradley scored 24 points to lead Boston to a 108-97 victory and a 3-2 lead in the best-of-seven series.

“You expect him to do what he does defensively, but we gave up 24 points to him tonight. He hurt us offensively tonight more than anything.”

Isaiah Thomas also scored 24 for the Celtics, the top seed in the East. After the road team won each of the first four games, the Celtics won at home in Game 5 to earn a chance to eliminate the Bulls on Friday night in Chicago. A Bulls victory would force the series back to Boston for a decisive Game 7 on Sunday.

“I was trying to eliminate letting Jimmy Butler get to the free throw line. That was my goal this game, and I feel like I did it,” Bradley said.

Wade had 26 points, 11 rebounds and eight assists. But Wade and Robin Lopez were called for technical fouls 32 seconds apart with just under five minutes left, helping the Celtics to a 20-5 run that turned an 84-84 game into a 15-point Boston lead.

The Bulls cut it to nine before Horford got loose for a dunk, Wade missed a 3-pointer and then Horford fed Jae Crowder for a layup that made it 108-95 with 99 seconds to play.

Despite the technical fouls, there was little of the tension that characterized Game 4, when Butler and Marcus Smart got in each other’s face on the court and continued the criticism in their postgame comments.

The Celtics started slowly on their home court, making just one of their first nine shots to fall behind 12-4. Boston missed its first eight 3-point attempts before making three in a row at the end of the first quarter.

Bulls: Before winning the first two games of the series, Chicago had only won one playoff game in Boston ever — Game 1 of the 2009 first round. … Butler brought the ball down with 6.2 seconds left in the third quarter and hit a 3-pointer at the buzzer to give the Bulls an 81-79 lead. … The Bulls had 16 turnovers that led to 23 Boston points. The Celtics only had six turnovers, leading to four Bulls points.

Celtics: There were at least nine members of the Super Bowl champion New England Patriots in the crowd, and a handful of players from the Boston Bruins as well. … Thomas missed his first four shots and didn’t make a basket until a second-chance 3-pointer with 42 seconds left in the first half. … Gerald Green made his third start, but he played less than 13 minutes and finished with two points after scoring 18 with seven rebounds in Game 4.

Rajon Rondo, who was the point guard on the 2008 Celtics team that won the franchise’s record 17th NBA title, did not play for the third straight game because of the broken thumb and strained ligament in his right wrist. He was on the court handling a basketball with his left hand before the game, then sat on the Bulls bench in a suit — this one with sleeves — and cheered on his teammates.

The Bulls fell to 0-3 without him in the series, with Wade largely taking over as point guard in Game 5.

Bulls coach Fred Hoiberg made waves after Game 4 when he questioned whether Thomas was getting away with carrying the ball when he dribbled.

Thomas took exception with the suggestion, saying it was the way he’d dribbled his entire career and was no different than the style of other All-Stars such as LeBron James and Rondo.

The final question to Hoiberg Wednesday was whether he’d had spotted any illegal dribbles from Thomas in the Game 5 loss.

“No,” he said, before walking out.

Check out the team sites for the Chicago Bulls and the Boston Celtics for more game coverage.