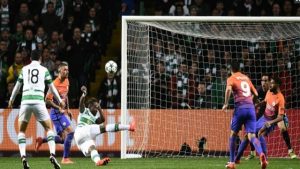 PARIS: Raheem Sterling netted at both ends as Manchester City were made to fight for a 3-3 draw with Celtic in a Champions League thriller on Wednesday, while Atletico Madrid once again did for Bayern Munich.

While City’s perfect start to the season was ended in Glasgow, their Premier League rivals Arsenal eased to a 2-0 victory against Basel.

Atletico had eliminated Bayern in the semi-finals last season and repeated the trick at the Vicente Calderon to make it a double for Spanish clubs against German opposition as Barcelona downed Borussia Moenchengladbach.

On paper, the Group C clash at Celtic Park appeared to be a bit of a mismatch with City looking to equal Tottenham Hotspur’s English record of 11 successive victories at the start of a campaign from 1960.

But instead Pep Guardiola’s men found themselves having to come from behind three times to claim a point at a raucous Parkhead, with Celtic first scoring in the third minute when an Erik Sviatchenko header went in off Moussa Dembele.

Fernandinho equalised only for a Kieran Tierney cross to go in off Sterling and restore the Scottish champions’ lead.

Sterling’s brilliantly-taken goal at the other end restored parity before the half-hour mark, but Dembele capitalised on an Aleksandar Kolarov error to make it 3-2 just after the break.

However, Nolito got City’s third equaliser and it was the English side who looked more likely to go on and win it.

“I don’t know how many the chances they had after the third goal. We should have won it,” said Guardiola.

It is Barcelona who are top of the section after the Spanish champions followed their 7-0 trouncing of Celtic last time out with a come-from-behind 2-1 victory over Gladbach in Germany.

Thorgan Hazard slotted the Bundesliga club in front in the first half but Arda Turan came off the bench to level after the break before Gerard Pique got the winner on 74 minutes.

“They put in a huge effort in the first half, but overall I think we were better and it is a deserved result,” said Pique.

Five-time European champions Barca, who were without the injured Lionel Messi, can now look forward to a fascinating double-header with their old coach Guardiola’s City.

Meanwhile, Theo Walcott made the difference as Arsenal eased to three points against Basel at the Emirates Stadium.

The Swiss champions have enjoyed excellent results in European competition against English sides in recent years but a first-half brace by Walcott ensured it was a comfortable night for the Gunners.

“We had pace, technical quality and movement. My only regret is we didn’t take all our chances,” said Arsenal manager Arsene Wenger.

PSG COME FROM BEHIND

They are level atop Group A alongside Paris Saint-Germain, who beat Ludogorets 3-1 in Bulgaria.

A Natanael free-kick gave Ludogorets the lead in Sofia, but Blaise Matuidi restored parity before the interval.

Edinson Cavani then grabbed two goals in the second half, either side of a Cosmin Moti penalty miss for the Bulgarian champions, to complete the comeback.

The Spaniards eliminated Bayern on away goals in the semi-finals of last season’s Champions League and there was to be no revenge for the five-time European champions, who would have lost by a wider margin had Antoine Griezmann not struck the bar with a late penalty.

Atletico have maximum points before a double-header with Rostov, who claimed their first ever point in the competition in a 2-2 draw with PSV Eindhoven in Russia.

All the goals came in the first half, with Dmitri Poloz twice having Rostov in front only for Davy Proepper and Luuk de Jong to score for PSV.

The Dutch champions could have won the game but Proepper saw his second-half penalty saved.

In Group B Napoli continued their excellent start to the season by beating Benfica 4-2 in Italy.

Marek Hamsik gave them a first-half lead at the San Paolo before three goals in seven second-half minutes, a Dries Mertens brace coming either side of an Arkadiusz Milik penalty.

Goncalo Guedes and Eduardo Salvio got goals back for Benfica, but they slumped to a first defeat of the season.

Also in Group B, Dynamo Kiev came back to draw 1-1 with Besiktas in Istanbul, substitute Viktor Tsygankov cancelling out Ricardo Quaresma’s opener.