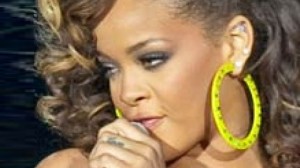 NEW YORK (AP) – CBS and Rihanna are splitting up after more fallout from the Ray Rice incident.

The network said today it was permanently editing a song featuring Rihanna’s voice out of its Thursday night NFL telecasts – after the singer issued a profane tweet about it.

A portion of Jay-Z’s Run This Town featuring Rihanna was cut from last Thursday’s game because CBS was covering the controversy over Rice’s assault of his then-fiancee.

CBS planned to use the song Thursday and for the rest of the season, but Rihanna tweeted, “CBS you pulled my song last week, now you wanna slide it back in this Thursday? NO, [expletive deleted]… Y’all are sad for penalising me for this.”

CBS issued a statement saying that it was “moving in a different direction” with different theme music.