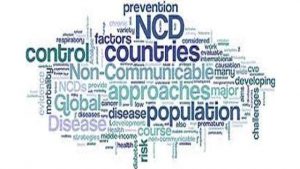 The Caribbean has the highest rate of mortality in the Americas from non-communicable diseases (NCDs) with more than 40 per cent of NCD deaths occurring prematurely in people under 70 years old.

Health experts told reporters Wednesday that the NCD epidemic, such as diabetes, hypertension, cancer, kidney disease, stroke and heart disease worsened across some Caribbean countries as the region observed the 10th anniversary of the landmark Port of Spain Declaration on non-communicable diseases that followed the special Caribbean Community (CARICOM) meeting held in Trinidad in 2007.

“All countries in the Caribbean have gained life but some have gained a lot more,” said Dr Alafia Samuels, the director of The George Alleyne Chronic Disease Research Centre at the Barbados-based Cave Hill campus of the University of the West Indies (UWI).

“The countries that have gained the most life over the past 40 years would be like Martinique and Guadeloupe — both of whom have increased their life expectancy by 15 years. Haiti also increased by 15 years.”

But two of the more advanced CARICOM countries, Jamaica and Trinidad and Tobago, saw their life expectancy grow by five years between 1970 and 2010, according to a study done by the centre.

Samuels said that the unfortunate situation in Jamaica and Trinidad was not caused by violence, adding “it is because people are dying of heart attack and strokes because peoples’ diets are unhealthy, they are not moving, they are smoking and drinking alcohol”.

Samuels was the principal investigator in a multidisciplinary team that evaluated the historic 2007 Port of Spain Declaration on NCDs.

CARICOM leaders who are ending their 38th annual summit here on Thursday are expected to decide on the way forward in tackling the epidemic.  But the researchers argue that increased taxation on tobacco, alcohol and certain food and drinks, such as sugar-sweetened beverages, is one of the major ways to curb the problem.

Regarding tobacco, for example, the report — done in partnership with the World Health Organisation (WHO) and the Pan American Health Organisation — noted that regional states are lagging in imposing taxes at 75 per cent of the sale price of cigarettes.
The report said no CARICOM country has achieved the target. Currently rates of taxation range from 17 per cent to 63 per cent. The ban on promotion, it added, has seen “little progress”. So too has been the implementation of graphic cigarette packet labelling.

Grenada, Jamaica and Trinidad and Tobago were studied and the report said revenue from increasing taxes on tobacco and alcohol could amount to more than US$37 million, far exceeding the estimated US$13 million cost of the WHO’s ‘best buy’ NCD intervention.

But Grenada’s Health Minister, Nicholas Steele, said a balance has to be struck on the issue of taxation.

“In most Caribbean territories, sometimes it’s not just simply the higher the tax, the greater the deterrent. At certain point increasing taxation doesn’t necessarily decrease the use of the product. We have to make sure there is an accessible alternative,” he told reporters.

Samuels said the Caribbean leaders have to act, especially given the heavy importation of food and the report’s observation that since 2007, targets relating to diet, schools and communications were the least met.

“We have disposable income in the Caribbean; we have food security; we do not have food sovereignty,” she said.