Cayon High School Closed Until Retesting Can Be Done 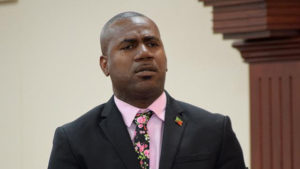 There is still no definitive opening date for the Cayon High School as the Ministry of Education has ordered another round of testing in the face of mold issues.

The Ministry held a meeting with CHS staff on Monday and although there has been no official word coming out of the engagement, Freedom FM understands the results of tests sent overseas did not give the all-clear for the school to be re-occupied.

Information received indicates that deep cleaning continues at the school in an effort to resolve the issue after initial tests a few weeks ago confirmed the presence of mold in two of the science labs.

Teachers had reported illnesses they associated with mold infestation and took a decision not to enter the facility until tests indicated the environment was safe.

Despite relative silence from the Ministry, Minister of Education Deputy Prime Minister Shawn Richards told Freedom FM on Tuesday that the cleaning continues this week which will be followed by more air quality testing. He stressed that the health and well-being of the staff and students remain paramount and as such the school will not be re-opened until it is declared safe for them to occupy.

In the meantime, the fifth form students will start classes at a space in the Cayon Primary School.