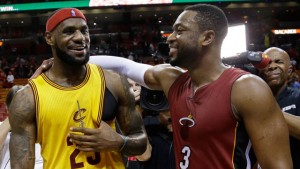 MIAMI — Dwyane Wade’s top offensive highlight of the night led to no points.

Didn’t matter. The Miami Heat had more than enough.

Wade scored 21 of his 32 points in the first half, Goran Dragic added 20 points and nine assists, and Miami handed LeBron James another loss on his former home floor with a 106-92 victory over the Cleveland Cavaliers on Monday night.

The win pushed the Heat back into the No. 8 spot in the Eastern Conference playoff race.

“Our guys wanted it very badly tonight,” Miami coach Erik Spoelstra said. “We understand what the playoff race is right now. It felt like an old Miami Heat game with normal Miami Heat huddles. Guys were screaming at each other, lot of passion in this game and it was much-needed.”

Hassan Whiteside had 16 points and 11 rebounds and Mario Chalmers finished with 16 points off the bench for the Heat, who won both of James’ regular-season trips to Miami this season — his first two games back since leaving the team and returning to Cleveland last summer.

“For this team, it’s about fighting for the playoffs right now,” Wade said. “Every day, we in, we out, we in, we out — so we needed this win today.”

James scored 16 of his 26 points in the fourth quarter for Cleveland, which had its four-game winning streak snapped. Kyrie Irving added 21, but shot only 5 for 15.

“I just stuck with it and found a good groove in the fourth quarter,” said James, who needed treatment on his knee throughout the day but decided to play. “Just tried to put some pressure on their defense and find a rhythm, which I did.”

Wade had 24 points at the half when Miami beat Cleveland on Christmas Day, and carried the Heat again early in this one. He had 16 points in the second quarter alone — matching the output of the entire Cleveland roster in those 12 minutes — and Miami had full control.

“I feel our legs just kind of gave out,” James said after Cleveland’s four-game, weeklong road trip came to an end. “And they did a good job exploiting that.”

And to think, Wade’s showcase move of the night didn’t lead to anything.

Midway through the third, Wade saved a loose ball at midcourt and flicked it behind his back to Dragic, his pass somehow splitting James and J.R. Smith. Dragic’s layup was blocked by Smith but Wade ran it down again, trying yet another behind-the-back save. That try by Wade went awry, and he sat in an expensive courtside seat for a few seconds to catch his breath.

“I’m not going to act like I planned that,” Wade said of the pass to Dragic. “It was kind of nice, though. I wish he could have got the finish, but I had no idea. I surprised myself. I was like, `Oh, that was nice.’ That was luck. That was luck, guys. Kids, don’t try that at home.”

James helped his friend and former teammate up, yet another sign of the respect they continue to have for one another. It was also on display a few moments earlier, when James spent a few minutes at halftime chatting and laughing with Wade as they stood near the Heat bench.

So both seemed happy, but once again, only Wade walked off in Miami with the win.

“He was vintage,” Spoelstra said.

Cavaliers: James played in his 900th regular-season game. … Cleveland lost for only the fifth time in James’ last 28 appearances. … Kevin Love (rest) sat out for the second straight night, and is expected to play Wednesday when Cleveland returns home to meet Brooklyn.

Heat: Miami has won nine straight home games against the Cavaliers. … The 18-point halftime lead was Miami’s largest of the season, topping the 54-37 edge it had at the break against Indiana on Jan. 23. … Whiteside finished with his 16th double-double. … Wade was 6 for 7 from the field in the second quarter, while Cleveland was 6 for 18.

There were four teams within a game for the last two playoff spots when Monday started, and the race somehow got closer by day’s end. Miami (30-36) is now tied record-wise with No. 7 Indiana and No. 9 Boston. Charlotte (29-36 after a loss at Utah) is a half-game back, but in 10th place.

Miami outrebounded Cleveland 45-32 and outscored the Cavaliers 44-32 in the paint.