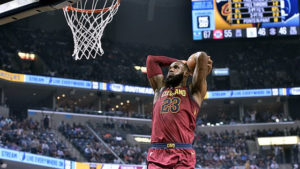 CLEVELAND — Maybe LeBron James should lose a game in the first round more often. Sunday’s defeat set the table for one of the more memorable playoff performances of his career in the Cavaliers’ 100-97 win over the Indiana Pacers on Wednesday to knot their series 1-1.

James scored the first 13 points of the game for either team and the first 16 points for the Cavs, hitting seven of his first eight field goal attempts to open a commanding lead for Cleveland.

It was the 1,362nd game of James’ career — regular season and playoffs combined — and the most points he has ever scored in the first five minutes of a game, according to research by ESPN Stats & Information.

If that weren’t impressive enough compared to his lofty standards, James’ 16 points in the first six minutes were the most by any player in the first six minutes of a playoff game in the past 20 seasons. He finished with 46 points, marking his 20th career postseason game with at least 40 and tying him with Jerry West for the second-most ever, behind only Michael Jordan (38).

Cavs coach Tyronn Lue, who did his part to incite change from Game 1 by swapping JR Smith and Kyle Korver into the starting lineup in place of Rodney Hood and Jeff Green, implored James to adjust his approach to Game 2.

In Game 1, James didn’t attempt a shot until there was 1:52 left in the first quarter, and the Cavs already trailed 25-8. In Game 2, James took only 16 seconds to hoist his first shot, a turnaround jump shot that he canned, and the Cavs rode James’ energy to a 26-8 advantage from the jump.

Outside of James’ early dominance, Indiana had to contend with foul trouble for its star, Victor Oladipo. He was whistled for his second foul of the game with 10:58 left in the first quarter, and Pacers coach Nate McMillan promptly subbed him out.

It was the second-most points James has ever put up in a half of a playoff game, trailing only his Game 6 effort against the Boston Celtics in 2012, a game many consider to be the best of his career. On Wednesday, James had particular success with Thaddeus Young as the primary defender, scoring 14 of his 29 first-half points on Young while going 5-for-6 from the field (2-for-2 from 3), according to ESPN Stats & Information.

Indiana made a push in the third quarter, with Oladipo scoring eight of his 22 points to cut Cleveland’s lead to just five at one point.

The Pacers got even closer in the fourth quarter, cutting the lead to three, but Oladipo missed a potential tying 3-pointer with 27.5 seconds left. The Cavs improved to 40-0 this season when taking a lead into the fourth.