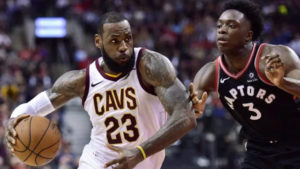 The Cavaliers haven’t been good enough throughout the season, especially defensively. The Raptors have – offensively, defensively, starters, bench. Hope has grown in Toronto of winning the Eastern Conference after getting eliminated by Cleveland the last two years.

But LeBron James and Cavs showed why it’s hard to pick any other team – even the first-place Raptors – to win the East in a 132-129 win over Toronto tonight.

Cleveland allowed 79 first-half points and fell behind by 15. But a LeBron-led offense was just too potent. This was the first time since 1990 (Nuggets over Spurs after trailing 90-83) a team surrendered so many first-half points then still won.

LeBron finished with 35 points, 17 assists and no turnovers. No forward has ever dished so many assists without a turnover in Basketball-Reference’s database, which dates back to 1963-64.

And LeBron led the Cavaliers to this win despite Tristan Thompson, Rodney Hood, Larry Nance Jr., Kyle Korver and Cedi Osman being out.

It’s only one game, and it was in Cleveland. But even with home-court advantage in a potential playoff series, the Raptors must grapple with even more lingering doubt now about their ability to beat the Cavs.