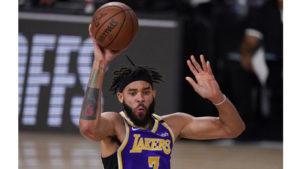 CLEVEAND (AP) — Looking to replace Tristan Thompson, the Cavaliers have acquired center JaVale McGee and a future draft pick from the Los Angeles Lakers for forwards Alfonzo McKinnie and Jordan Bell, a person familiar with the deal told The Associated Press on Sunday night.

The Cavs will get a second-round pick in 2026 from the Lakers, said the person who spoke on condition of anonymity because the teams have not announced the swap.

On Saturday, Thompson, who played nine seasons with the Cavs and helped them win a championship in 2016, agreed to a two-year, free-agent deal with the Boston Celtics.

The 32-year-old McGee spent the past two seasons with Los Angeles after two with Golden State. The 7-footer averaged 6.6 points, 5.7 rebounds and 1.5 blocks for the NBA champions this past season.

The Lakers needed to move McGee in order to open up salary space after getting Marc Gasol to agree to a two-year contract.

McGee will likely serve as a backup to Cleveland center Andre Drummond, who picked up his $28 million player option last week to stay with the Cavs.