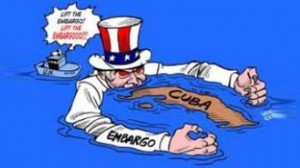 UNITED NATIONS, Oct 28, CMC – Caribbean Community (CARICOM) countries Tuesday called on the United States to end the decades old trade and economic embargo against Cuba, saying that that for the past 54 years, Cubans have endured severe economic loss and stagnation.

Barbados Permanent Representative to the United Nations, Joseph Goddard addressing the world body on the “necessity of ending the economic, commercial and financial embargo imposed by the United States against Cuba,” said that the move had prevented the Communist Caribbean country from expanding its commercial ties with the rest of the world.