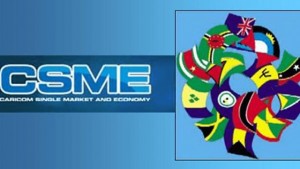 Caricom Heads say citizens can expect to see action in some key areas of the regional integration plan, the Caricom Single Market and Economy, CSME.

During the 40th Regular Meeting of the Conference of Caricom Heads of Government held in St. Lucia last week, Heads of Government expressed concern at the slow pace and low level of implementation of the CSME and at the lack of urgency exhibited by some Member States in enacting the necessary legislation and putting in place the administrative measures for implementation.

Speaking at a press conference at the close of the meeting, Barbados Prime Minister Mia Mottley said while there are various implementation time limes, some critical issues may be formalized before the next inter-sessional meeting.

“There’s a long list of timelines. There are about two pages of items and timelines; I don’t want to call it an implementation deficit disorder anymore, I think having diagnosed what it was, the medication is working, but we need to stay on course.

“But the bottom line is that for us, there are a number of things that will be happening. We hope for example by the next Caricom inter-sessional meeting which will be held in Barbados, that we will put behind us a number of the key aspects of the financial architecture, a common financial services agreement, the work towards regional harmonization with the stock exchange, the credit rating bureau, and the whole question of a common investment policy; similarly there are some definitional issues that we’re trying to sort out with respect to fisheries workers. This is the nitty gritty of execution to provide the level of certainty that would give our citizens the comfort that we want them to have.

“Of course we’ve made significant progress in the last year with the establishment of the contingent rights – people being able to move with respect to their families and dependents…, the public procurement notice board, that will allow businesses in different countries to be able to participate in procurement. These are some of the things we’ve done in the last year and quite frankly we’ve done a helluva lot, but we also recognize that we need to, just on a few of the more complex issues, which is what a lot of the financial services type agreement are, that we need to be able to carry along each and every one of our jurisdictions.”

She sad there are some concerns on drafting issues and it was important that instead of rushing the process for this year, Heads gave themselves until February 2020 to follow through on the planned implementations.

Heads of Government said they recognized that there were various capacity constraints and there was need to strengthen capacity at the national level to address the challenges and agreed to provide greater support to the CSME Focal Points through the strengthening or establishment of CSME Units within the Ministries with a focus on implementation in accordance with the agreed timelines.