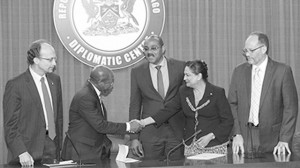 BASSETERRE, ST. KITTS, NOVEMBER 5TH 2014 (CUOPM) – St. Kitts and Nevis’ Prime Minister and other Caribbean leaders have adopted a ten-point plan of action to ensure the deadly Ebola Virus Disease (EVD) does not reach the region.

Cuba is also expected to play an integral part in the initiative.

The announcement was made after a four-hour meeting held at the Diplomatic Centre in St Ann’s, Trinidad on Tuesday, which also centred on the Chikungunya virus outbreak.

The plan, which is referred to as, Stop Ebola There and Here (Seth), also included measures to seek financial support from non-governmental organisations and business communities.

Asked what was the figure of monies needed Persad-Bissessar said: “There would be some level of funding and I believe the number of US$7 million was mentioned but that was only for the work of CARPHA. So there will be national efforts, as well as regional efforts and efforts outside of the region of those who have expressed interest in partnering with us in terms of financial assistance.”

PM Browne, who chaired the press conference, said the discussions focused on the possible health impact of the virus and also the possibilities of the economic and social consequences one case could have. Responses to diseases must be a community effort. No member state of Caricom must battle these public health challenges on its own.

“The meeting accepted that the likelihood of penetration of the Ebola virus in the region is low and this is based on the low level of traffic from affected areas,” Browne said.

Persad-Bissessar, who endorsed Browne’s statements, said there would be the establishment of a regional rapid response team known as (Carib React).

This team, she added, would be integral in ensuring quick response and attention to any member state, and would be able to provide support to national response teams to contain any outbreak.

She said: “One of the critical areas identified for action is that of capacity building among Caricom member states, particularly in the areas of prevention and control.

“Regional leaders acknowledged the enormous contribution of Cuba in assisting affected West African countries, and noted that the country has indicated interest in working with Caricom to build capacity in the region to deal with any incidence of EVD.” Persad-Bissessar said T&T supported the participation of Cuba in the regional strategy and the matter would be discussed further at a Caricom-Cuba Summit to be held next month.

On whether government would heed the call of some to ban Carnival next year, the PM said it was too early to decide adding that plans were “full steam ahead.”

• Strengthen effective, co-ordinated measures at ports of entry to prevent Ebola from entering the regional community, including harmonising travel restrictions

• Strengthen health systems including training, equipment, laboratories and containment, and enlist the participation of airlines in the Region in transporting specimens and response teams

• launch an intensive public education campaign for citizens of the Region, visitors and those outside.

• Organise a comprehensive resource mobilisation effort including a possible Stop Ebola There and Here (Seth) Fund, to which governments, citizens and businesses here and abroad may donate

• Participate in capacity-building efforts at the global and regional levels to gain experience for our benefit;

• Establish a Regional Co-ordinating Mechanism on Ebola (RCME) with CARPHA as Chair, including the Caricom and OECS Secretariats, IMPACS, CDEMA, and inviting Cuba to participate, The RCME will report to the lead head of government on health, with the immediate responsibility to develop a comprehensive regional strategy to address Ebola preparedness in collaboration with PAHO/WHO.

• Invite PAHO/WHO, the United Nations, development partners and other contributors to a meeting within one (1) month to expand the effectiveness of our collective response;

• Review and reinforce the effectiveness of these measures as implemented at intercessional meeting of conference in February and the conference of heads in July 2015.

• That there must be a multi-sectoral approach to fighting the disease that would include education, tourism, media, local government and other sectors and capabilities, including private enterprises, and explore the use of new technologies

• That there must be a well-co-ordinated, continuous public education campaign on how the disease is spread, targeting the citizenry, travellers, and tourism stakeholders

• The facilitation by PAHO/WHO of Bulk purchase of essential public health supplies, such as bednets, insecticides and repellent.