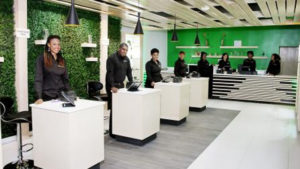 Jamaica has opened its first seed-to-sale cannabis retail store. Located in Market place on Constant Spring Road, it opened its doors over the weekend.

The ribbon-cutting ceremony signified the beginning of a new era for the use of medical marijuana in Jamaica, with brothers Karibe and Dwayne McKenzie at the helm. As the first company to be granted a licenses to cultivate, process and retail medical grade ganja by the Cannabis Licensing Authority (CLA) in Jamaica, EPICAN offers a product rooted in Jamaican sun and soil. The McKenzie brothers spent three years educating local farmers in methods that meet international growing standards in an effort to bring marijuana farming in Jamaica out of the shadows and on to the global stage.

Dwayne McKenzie, president of EPICAN, says the opening of the store will highlight the therapeutic properties of the cannabis plant, and he is happy that Jamaicans finally have a place to go to be educated about the plant, as well as to partake of all its by-products. “It’s not about getting high. In Jamaica, cannabis will be produced by licensed producers and distributed to aid persons – it’s about the therapeutic proponents of the cannabis plant,” he said, with his brother pointing out that their long-term goal is for Jamaica to join the marijuana conversation on the international scene. “Since 2015, EPICAN has been studying and identifying indigenous Jamaican strains of cannabis, as well as analysing the ratio of cannabinoids and terpene profiles within those plants in conjunction with Jamaica’s Scientific Research Council (SRC), in an effort to pinpoint what makes Jamaican cannabis unique,” Karibe, CEO of EPICAN, explained. “Our long-term national strategic interest is to ensure the competitiveness of Jamaica’s marijuana industry.”

In addition to EPICAN’s 43,000-square-foot vertically integrated cultivation facility, they also have a 5,000-square-foot, state-of-the-art extraction plant that is able to process and support its own organic cultivation output. The facility focuses solely on cannabinoid and terpene extraction, identification and formulation for medical purposes within the Jamaican market. They want to ensure they continue to turn out a consistent product that is of the highest quality, potency and purity. Doctors were on-site at the opening offering free medicals, qualifying guests for their medical marijuana cards.

EPICAN currently employs over 50 local farmers at its growing facility in the Blue Mountains. They also started CanEx, Jamaica’s first Cannabis conference, as they continue working to educate the public on the healing benefits of cannabis through their sponsorship of Rebel Salute’s Herb Curb, staying true to their tagline of ‘educate, medicate, elevate’.