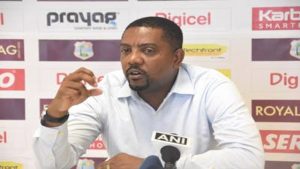 KINGSTON, Jamaica (CMC) – West Indies Cricket Board president Dave Cameron has defended the timing of the decision to sack head coach Phil Simmons, and says he expects the “bold” move by the board to be vindicated in the future.

Simmons was controversially fired last month on the same day the West Indies squad left the Caribbean for the United Arab Emirates to take on Pakistan in a Twenty20, One-Day International and Test series.

But with the board having come under heavy criticism from several quarters over the decision – especially in light of the wretched results on the current tour – a defiant Cameron argued there would never have been an ideal time to remove Simmons.

“There will always be criticisms, for example, the one about the coach – the timing [of the decision],” Cameron told Line & Length Network.

Trinidadian Simmons, who spent a turbulent 18 months in the post, was terminated over what the board labelled as “differences in culture and strategic approach”.

Subsequently, the Pakistan tour has proven shambolic for West Indies, as they suffered whitewashes in the three-match T20 and One-Day International series, and currently trail 0-1 in the three-Test series.

They were uncharacteristically out of sorts in the T20s – their strongest format – looking anything but the reigning World champions with lacklustre performances in all departments.

Seasoned all-rounders Dwayne Bravo and Kieron Pollard, who were members of the limited overs squad, recently blamed the sudden firing of Simmons for the string of poor results, telling media on their return to the Caribbean that the decision had demoralised the squad.

However, Cameron, who in the past has come under fire for his handling of players issues, said leadership was about making bold decisions.

“It’s what management, leadership is about and I think years later once all of this has died down and people have seen what we’ve actually put in place in the last two years, this will all go away and people will realise we had to take some very bold decisions at this point in time,” Cameron contended.

During Simmons’ time in charge, he managed to pull off a rare Test win against England and force a 1-1 draw in the series in the Caribbean last year, and also oversaw the Windies’ capture of an unprecedented second T20 World Cup title in India last April.

He had, however, previously fallen out with the board after he charged last year September that there had been “outside interference” in the selection of the West Indies one-day squad to tour Sri Lanka. He was subsequently suspended for the tour and only reinstated for the series away to Australia, after tendering a public apology.

In a frank interview following the T20 World Cup triumph, Simmons hinted at a strained relationship with Cameron, noting that since his suspension “there has been no communication, not verbal nor written”.

Ironically, Simmons had filled the post made vacant by Ottis Gibson, who was similarly axed on the eve of Bangladesh’s tour of the Caribbean two years ago.