Calls for Minister Grant to resign after altercation with police 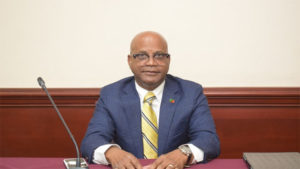 The Opposition St. Kitts Nevis Labour Party has called on Minister of Tourism, Transport and Ports Lindsay Grant to resign as a video circulating on social media shows Grant in an altercation with Police officers assigned to the federation’s Covid19 Taskforce.

The SKNLP statement issued on Tuesday said “The Leader of the St. Kitts-Nevis Labour Party, Dr Terrance Drew, calls for the immediate resignation of the Hon. Lindsay Grant, Minister of Tourism, Transport and Ports, following the shocking video that is being circulated on social media depicting Minister Grant viciously disrespecting and assaulting compliance officers of the NEOC Task Force (who were in full police uniform) and openly refusing to comply with the COVID-19 Protocols approved by Federal Cabinet of which he is a part of. In the video (captured on someone’s mobile phone), Minister Grant is seen at a nightspot without wearing a mask, verbally and physically accosting an officer who was insisting that patrons sign their name to register for contact tracing.”

Referring to the actions of the sitting minister of government as appalling, particularly within the context of the spike in COVID-19 cases in recent weeks, the Labour party further called on Prime Minister Dr Timothy Harris to “enforce discipline within his cabinet for this unforgivable breach of the law and the trust and confidence of the people who Minister Grant is called to serve and obey.”

The St. Kitts Nevis Labour party further made the case for Grant’s resignation by likening the situation to the of other government officials.

“Mr Grant must be held to the standard enforced globally, as found in the cases of former Minister of Agriculture and Fisheries, Floyd Green of Jamaica, former Minister of Health, Matt Hancock of the UK and Ministers Zane DeSilva and Wayne Caines of Bermuda who were all forced to resign on the invitation of their Prime Ministers for similar breaches of COVID-19 rules in those countries.”

It said: “This latest incident is one in a growing list of breaches that have been perpetrated by the Minister of Tourism and his resignation has been long overdue.”

Meanwhile, Minister of Youth Sport and Culture Hon. Jonel Powell has released a statement distancing himself from the incident following claims that he was present during the altercation.

On his official Facebook page, Powell posted on Tuesday, “I have been made aware of a video currently being circulated on social media. I would like to categorically state that the voice heard in the video is NOT mine, nor was I, at anytime, in an altercation with the police. I have had no altercation with any police officer and was not even in the presence of the officers when the recorded incident occurred. I would like to thank all of those persons who have shown their confidence in me and have corrected those who thought otherwise.”

Social Media in St. Kitts has been buzzing with varying opinions following the release of the video from several vantage points.

In response to Powell’s statement, one person posted “Imagine you weren’t involved but you still came and made a statement. Kudos to you! Please encourage your colleague to do the right thing and make a statement. A public apology would be good.”

Later on Tuesday, Minister Grant released a statement which said: “I have seen the videos, I have heard the commentary on the airwaves and I have read the messages regarding the incident between myself and policers. While the videos do not display the full extent of the incident that night, I do understand the position that I hold. I regret how the circumstances have been portrayed and I wish to assure the public and the police in particular that I fully support their efforts at the preservation of law and order. I encourage the police to gather all the evidence and to investigate the full context of the matter.”

His response to the incident was met with dissatisfaction, prompting many Kittitians and Nevisians to express their angst on social media.

One person posted “Dis and nutten is d same thing…just say you were wrong and done wid it!”

“You ought to be ashamed of yourself,” another posted. “You are the one who gives our policemen a bad name. Dishonourable Minister Grant.!!!”

“If that is an apology, heaven help us nothing more going to come out of this so you all better take what you get,” another wrote.

Another posted “This is a hogwash statement!! Too big to apologize.”

Meanwhile, some people seemed to find humour in the situation.

“I want the statement in a video form as well. Video for Video, ” and another said “This is one of those “bless your heart” apologies.”

One poster sympathetic to the situation said “Apology is Apology. Everybody can’t Apologise the same way… moving right along.”

It remains to be seen what if any action will be taken. Prime Minister Dr Timothy Harris has not issued a statement on the incident.