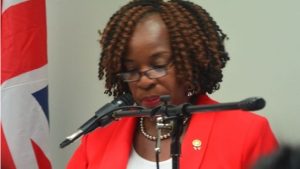 TORTOLA, British Virgin Islands (CMC) — The Department of Labour has announced change to the application process for work permits that will lead to a shorter processing period for applications as of January 2017.

According to Labour Commissioner Janice Rymer the goal is to establish a four-week window for the processing of new permits and two weeks for renewals.

“Ultimately, we want to make the work permit application process as simple as possible, improve efficiency and enhance customer satisfaction,” Rymer said in a government release.

She added that plans are in place to establish an electronic central job board, and to strengthen the placement unit that is responsible for building the capability of job seekers in this British Overseas territory.

“The new processes will facilitate a better link between the departments and their respective ministries, and will pave the way for more effective evidence-based policy making. It will also reduce administrative burden, thereby allowing more of the department’s resources to focus on employment services, and helping locals to improve their skills and qualifications for available jobs,” she said.

Meanwhile, delivery specialist with the Financial services Implementation Unit (FSIU), Monique Hodge, who has been working with the Department of Labour, expressed optimism that the improvements will become a reality.

“Both departments are firmly committed to having the improved processes implemented by January 2017.”

The government says the Reform of Immigration and Labour is a critical component of the BVI Forward campaign.

“It is key to attracting and retaining the necessary talent to support the financial services industry while at the same time developing the capability of BVIslanders.”