Home / National / Bus Men: We Had No Clue About Construction At The Terminal

Bus Men: We Had No Clue About Construction At The Terminal 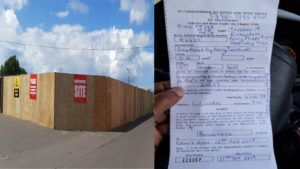 Construction to make major renovations to the West line Bus Terminal began Monday, however according to the bus association for that area, the passenger bus drivers were never informed.

President of the West line Bus Association Bernard Boland told Freedom FM the drivers saw the terminal cordoned off with boards on Sunday and had no idea what was going on and how they would ply their trade come Monday morning. He also confirmed that although there was allegedly no communication from SCASPA or the Traffic Department about the arrangement for dropping off and picking up passengers, drivers were issued traffic tickets at the terminal area on the very first day.

According to Boland SCASPA, which is responsible for the terminal, met with the association’s executive in January 2018 to get their input for the remodeling of the terminal, which was due to begin that February. He says until this point, he nor his executive has heard anything further from SCASPA about said construction.

He said on Monday drivers were herded into the few parking slots in front of the bars at the terminal with no clear instruction about how the whole operation would be undertaken. Aside from the chaos of queueing especially during rush hours, he says, the temporary arrangement could lead to revenue losses for the bus drivers and inconvenience for passengers.

When asked if the Association would be making representation to the relevant authorities to come to a workable arrangement, Boland said it would be futile since the authorities have never taken their views and grievances into consideration or implementation in the past.

As at press time attempts to get a response from authorities were unsuccessful.

The project is scheduled to be completed in December 2019 ahead of the busy Christmas/Carnival season.