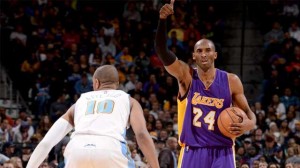 DENVER —The old Kobe Bryant sure looked an awful lot like the young Kobe Bryant.

That’s what a little bit of rest will do.

Bryant had 23 points, 11 assists and 11 rebounds for his 21st career triple-double, and the Los Angeles Lakers held off the Denver Nuggets 111-103 Tuesday night to end a three-game losing streak.

At 36 years, 129 days, Bryant is the second-oldest among active players to record a triple-double, trailing only Tim Duncan, who was 38 years, 224 days when he had 14 points, 10 rebounds and 10 assists against Memphis on Dec. 5, according to STATS.

“It just seemed so easy for Kobe to get that triple-double,” teammate Jeremy Lin said. “He’s so talented. … He’s lost a little bit of his athleticism. He’s not the same, in terms of explosiveness or his body recovering or whatever. That’s no secret.

“But he’s finding ways to be effective and manage regardless of that. As your body evolves, you have to evolve as a player.”

Bryant played nearly 32 minutes in his second game back after missing three games around Christmas because of overall soreness. That time off proved beneficial. It gave him a chance to reflect — on his game and the way he wanted to play.

“You see now — very, very efficient,” said Bryant, who also had nine turnovers. “I know exactly where I want to go. I get to my spots. I don’t try to beat guys with quickness. I back them down, get to my areas and elevate over them. Old school Oscar Robertson-style.”

The Lakers star shot 6 of 11 from the floor, giving him 25,000 field goal attempts for his career. The only players who’ve attempted more shots in NBA history are Kareem Abdul-Jabbar (28,307) and Karl Malone (26,210), according to STATS.

Are all those attempts catching up to him now?

“Absolutely,” Bryant said. “I feel every single one of them.”

As Bryant sat in the locker room, he placed his feet in an ice bucket.

Nuggets coach Brian Shaw warned him of days like this.

Before the game, Shaw told stories about being teammates with Bryant a decade ago and how Bryant used to make fun of the veteran for icing his knees.

“I told him that one day ice was going to be his best friend,” Shaw said.

About then, Bryant stopped by and hugged Shaw.

“I’m sharing stories about when you used to laugh at me (for using ice),” Shaw said.

“Now I’ve got to do it before the game. How about that?” Bryant said.

Carlos Boozer had 19 points and Ronnie Price added a season-high 18 for the Lakers.

Ty Lawson and Jusuf Nurkic both finished with 16 points for the Nuggets, who have lost four of five.

Nurkic was trying not to be a fan, even though Bryant was one of the rookie’s favorite players when he was growing up in Bosnia Herzegovina.

“When I played overseas, I followed him all the time,” Nurkic said. “But we lost. He did what he wanted.”

Just as Bryant used to when he was younger. Given his age and injuries, he’s had to retool his game.

“It’s like golf and changing your swing,” Bryant said. “But it’s something that I have taken the challenge. I’ve figured it out, like I’ve figured everything else out.”

After getting out to a fast start, the Lakers appeared to be cruising toward a blowout win. They led by as many as 23 points late in the third quarter, only to have Denver slice the lead to 101-96 with 3:53 remaining.

That’s when Bryant drew a foul on Alonzo Gee on a 3-point attempt. The Nuggets weren’t pleased with the call and Nate Robinson voiced his displeasure, drawing a technical foul. Bryant made three of four free throws to help the Lakers gain some separation.

Robinson drew another technical after having a 3-pointer taken off the board — he stuck out his foot to draw contact — and was ejected.

“The problem with us was we waited too late to start playing with that kind of energy and intensity,” Shaw said.

Lakers: Coach Byron Scott will bring center Tarik Black along slowly after the Lakers were awarded the rookie on Sunday when he was waived by Houston. … The Lakers made their first seven shots. … Los Angeles set a season high for assists (31).

Nuggets: F Kenneth Faried was held to four rebounds. He grabbed 44 over his previous two games. … Wilson Chandler, one of the Nuggets’ top scorers, bruised his right quadriceps in the first half and didn’t return. He finished with nine points.

Nuggets: At Chicago on Thursday.