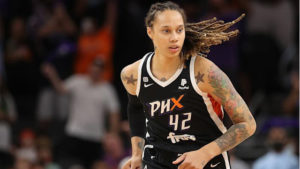 The US and Russia have exchanged jailed US basketball star Brittney Griner for notorious arms dealer Viktor Bout, held in an American prison for 12 years.

President Joe Biden said Griner was safe and on a plane home from the United Arab Emirates.

“I’m glad to say Brittney’s in good spirits… she needs time and space to recover,” he said at the White House.

Griner was arrested at a Moscow airport in February for possessing cannabis oil and last month sent to a penal colony.

The elaborate swap involved two private planes bringing the pair to Abu Dhabi airport from Moscow and Washington respectively, and then flying them home.

According to Politico website they walked past each other on the airport tarmac.

“The Russian citizen has been returned to his homeland,” the Russian foreign ministry said in a statement. Hours later he spoke to his family and said he was back on Russian soil. Reports said his plane had stopped for refuelling in the Dagestan region, three hours’ flight from Moscow.

The heir to the Saudi throne has good relations with Russia’s Vladimir Putin and in September he helped co-ordinate a complex swap of hundreds of prisoners held by Russia and Ukraine.

When negotiations began to secure Griner’s release during the summer, the US made clear it wanted ex-marine Paul Whelan to be included in an exchange.

But it became clear Whelan, jailed in 2018 on suspicion of spying, would not be part of the Russian swap, dashing his family’s hopes.

Bout’s lawyer, Alexei Tarasov, told Russian TV that from the start the US wanted two of its citizens returned, and Russia’s foreign ministry complained that “Washington categorically refused to engage in dialogue”.

Paul Whelan told CNN he was “greatly disappointed” more had not been done to free him, as he had carried out no crime: “I don’t understand why I’m still sitting here,” he said.

President Biden finally signed the order for Bout’s release, commuting his 25-year jail term, in a direct swap for Griner.

“In the end, as we have seen, the exchange took place in the format of one for one. Because really an exchange should be equal,” said Mr Tarasov.

Bout’s wife Alla told Russian TV she had spoken to him only two days ago: “He was supposed to call me tonight. Now we’ll see each other and hug each other. That’s better than any phone call.”

Viktor Bout sold arms to warlords and rogue governments, becoming one of the world’s most wanted men.

Dubbed the “merchant of death” for gun-running in the years after the fall of the Soviet Union, the Russian’s exploits inspired the 2005 Hollywood film Lord of War, which was loosely based on his life.

His secretive career was brought to an end by an elaborate US sting in 2008, when he was arrested at a hotel in the Thai capital Bangkok, to the anger of the Russian government.

He was extradited two years later and has spent the past 12 years languishing in an American jail for conspiring to support terrorists and kill Americans.

Bout’s circumstances could hardly be more different from that of his opposite number in the prisoner swap.

Brittney Griner, 32, is one of the best-known sportswomen in America. During the US basketball season the double Olympic champion is a star centre for Phoenix Mercury in the WNBA.

Her only reason for flying to Moscow was to play in Russia during the off-season in the US. She told her Russian trial that the cannabis oil found in her bag had been an “honest mistake”.

In his tweet, President Biden posted a picture from the Oval Office alongside Griner’s wife Cherelle.

“Moments ago I spoke to Brittney Griner. She is safe. She is on a plane. She is on her way home,” he wrote. Shortly afterwards they both spoke publicly in statements carried live on US TV networks.

Secretary of State Antony Blinken singled out the efforts of presidential envoy Roger Carstens, who was accompanying Griner on the plane from the UAE.

Leading figures in US basketball welcomed her release, among them twice WNBA champion Breanna Stewart of the Seattle Storm.

Griner was moved last month to a penal colony in Mordovia, a remote area some 500km, (310m) south-east of Moscow. She was held not far from where Paul Whelan is serving his 16-year jail term on spying charges.

“While we have not yet succeeded in securing Paul’s release we have not given up; we will not give up,” he vowed.

Whelan’s brother, David, praised Griner’s release and said US officials had warned the family in advance that Paul Whelan was not part of the exchange.

“It’s clear the US government needs to be more assertive,” he said in a statement. “If bad actors like Russia are going to grab innocent Americans, the US needs a swifter, more direct response.”

Former White House national security advisor John Bolton condemned the deal as a not a swap but a surrender by the Biden administration: “Terrorists and rogue states all around the world will take note of this and it endangers other Americans in the future.”

Thursday’s prisoner exchange is not the first between Russia and the US this year. US marine Trevor Reed spent three years in jail for assault before being traded last April for Konstantin Yaroshenko, a Russian pilot convicted of smuggling cocaine.

Speaking from a Russian penal colony, Paul Whelan said he had been told that Russia “put me at a level higher than what they did with Trevor and Brittney”, because he had been accused of spying.

President Biden urged Americans to take precautions before travelling overseas, and warned of the risk of being wrongfully detained by a foreign government.