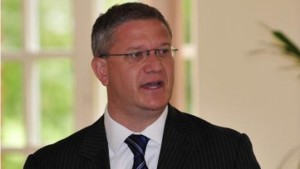 LONDON, England — A Saudi billionaire, whose diplomatic immunity as a Saint Lucia ambassador is shielding him from a multi-million pound divorce settlement with his ex-wife in the British courts should have his immunity waived, a senior British member of parliament has said.

Conservative Andrew Rosindell, a member of the Foreign Affairs Select Committee, has become the first MP to publicly question the appointment of Walid Juffali to an ambassadorial role with Saint Lucia, Britain’s Daily Mail newspaper reported.

Rosindell, who is also a member of the all-party parliamentary group on the British Caribbean, has called on the Saint Lucian government to lift his immunity, claiming the incident is “making a mockery of diplomatic privileges”.

He has also questioned Juffali’s suitability to serve as Saint Lucia’s permanent representative to the International Maritime Organisation (IMO), given he has no known maritime experience and has yet to attend a single meeting with the IMO during the 19 months since his appointment.

His position was never made public in Saint Lucia and was given to him in April last year – just four months after he visited the Caribbean island for the first time in December 2013.

Rosindell said: “It seems strange that a position traditionally held by Saint Lucia’s High Commissioner should be handed to an individual with little connection to the island, and who apparently lacks the relevant experience to advise the IMO.

“As a member of the Commonwealth, and whose present monarch is Queen Elizabeth II, Saint Lucia has a duty to uphold the highest political standards and levels of transparency.

“Diplomatic immunity is a huge privilege, and should only be exercised in the most demanding and relevant instances. To use it for personal benefit risks making a mockery of diplomatic privileges.

“There is an argument to suggest the Saint Lucia government waive Mr Juffali’s immunity for the duration of any civil case he is involved with.”

The controversy has also coincided with the Commonwealth Heads of Government Meeting, which took place in Malta over the weekend.

It is understood that Saint Lucia may have privately came under pressure to explain the appointment at the summit meeting.

Rosindell added: “Although this issue may not have featured publicly on the agenda at the Commonwealth Heads of Government Meeting, I expect it was debated privately among the diplomats in attendance.”

The role of Permanent Representative to the IMO, an organisation set up in 1948 to help enforce regulations across the world’s shipping industry, has traditionally been held by Saint Lucia’s High Commissioner in London.

However, the country’s former High Commissioner, Dr Ernest Hilaire, agreed to stand down from the role shortly after meeting Juffali.

Britain’s Foreign and Commonwealth office has yet to comment on the issue.

Juffali, who is the chairman of one of Saudi Arabia’s biggest conglomerates, denies any wrongdoing, saying the appointment was made in accordance with standard diplomatic procedures.

The ruling St Lucia Labour Party (SLP) has also dismissed criticism of the appointment, claiming Juffali is helping source investment for Saint Lucia and has been instrumental in establishing a Global Diabetes Research Centre in the country.

Eldridge Stephens, who served as Saint Lucia’s High Commissioner in London between 2008 and 2012, has also questioned the appointment.

“I am yet to understand fully why it is that this government feels it necessary to engage the services of this businessman. Can we make everyone who invests money in Saint Lucia an ambassador?

“If Mr Juffali has not attended any IMO meetings he should not have benefitted from the appointment that he has been given.

“If this is causing an embarrassment to the nation the best possible action needs to be taken, and if that means waiving immunity for the length of time that the case is being held then let’s do it. Thereafter if we find him fit for service we will reinstall him.”