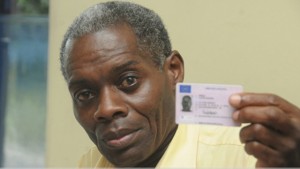 THE British High Commission in Jamaica has asked United Kingdom Immigration authorities to give urgent attention to the case of Lloyd Bogle, the 64-year-old Jamaican who has been living in England for more than 50 years and who, because of his immigration status, is now stranded here after a two-week visit.

“We are aware of the case. I was sorry to read about Mr Bogle’s situation today,” British High Commissioner David Fitton told the Jamaica Observer yesterday after seeing the newspaper’s front page story.

“I have asked colleagues in UK Visas and Immigration to review the case urgently. I cannot really comment any further on an individual case for reasons of privacy,” Fitton added.

Bogle, who left Jamaica in 1957 when he was seven years old, arrived in the island on September 29, 2014 on a two-week visit to see the land of his birth, given that he had not travelled since going to England.

However, when he got to Sangster International Airport in Montego Bay on October 13 last year to take a return flight to England, he was told by Immigration officials that they could not allow him to leave.

“I got the shock of my life when I was turned back and told by authorities that I would have to have a visa to leave the country,” Bogle told the Observer on Monday.

He admitted that he never applied for British citizenship during all his years in England and that he travelled to Jamaica on a Jamaican passport that he applied for and received shortly before his trip.

“Since I migrated at age seven I have never travelled and never had any intention to. It was after I retired I decided to take a trip to Jamaica to see what the country was like,” Bogle said.

“I knew no one in Jamaica; it was the first time I was travelling since I was seven,” said Bogle, who was close to tears.

He said that he was on the verge of sleeping in the streets, as he had nowhere to go. However, he contacted his mother in England and she gave him the number for a Jamaican woman who once lived in England and told him to contact her for help.

Bogle said it was through the kindness of this woman, who gave him a place to stay, that he has been able to survive.

He next made contact with the British High Commission in Kingston to apply for a visa and was given a list of documents he would need for the process.

Those documents were brought to Jamaica by his mother. However, his visa application was not approved.

Now stranded, running out of money, and with no family in Jamaica, Bogle is desperate, as he wants to return to his home in England.

The publication of his story on the Observer website went viral yesterday and several lawyers from Jamaica and in England contacted the newspaper to offer Bogle assistance.

“I was saddened to learn of the plight of Mr Bogle. I am a Jamaican barrister in the UK and I undertake immigration work, though it does not form the core part of my work,” said Linda Hudson. “I would be prepared to assist Mr Bogle.”

Another British lawyer, who declined to give his name, said: “I have read with interest your article in relation to Mr Bogle’s immigration status in Jamaica. I am an immigration solicitor who is very experienced in UK immigration law. I am willing to assist Mr Bogle with this matter.”

High Commissioner Fitton said he was aware that there are many long-term residents of the UK, including Jamaicans, who do not have British citizenship.

“If they leave and then return to the UK they are, of course, subject to immigration rules. Our advice would be they should check their documentation carefully before they leave the UK to make sure they can return,” Fitton said.