Brazil will be top-ranked team at World Cup in Qatar 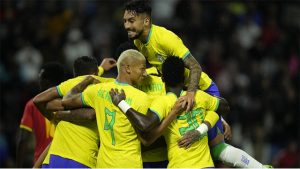 Brazil will go to this year’s World Cup as the top-rated team after extending its lead over second-place Belgium in the latest FIFA rankings released Thursday.

Brazil won its two warmup games in September — against Ghana and Tunisia — while Belgium lost to the Netherlands in one of its two Nations League games.

Argentina stayed at No 3 and 2018 World Cup champion France is still at No 4.

The World Cup in Qatar starts on November 20.

Italy rose one place to No 6 and is the highest-ranked team that failed to qualify for the World Cup, missing back-to-back editions. Spain fell one place to No 7, with Netherlands, Portugal and Denmark unchanged to complete the top 10.

Also, Russia rose two places to No 33 despite not playing a recognised game in 2022 because the national team was suspended following the country’s invasion of Ukraine.