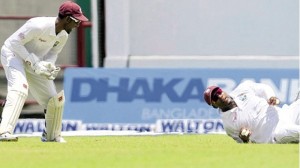 THAT’S NOT THE WAY: West Indies fielder Darren Bravo fails to take a catch in the first Test against Bangladesh at Arnos Vale Sports Complex, Kingstown, St Vincent on Tuesday. At left, captain Denesh Ramdin is far from amused. Despite sloppy fielding, West Indies won the match by 10 wickets.

The warning lights set off by Darren Bravo’s decision to decline selection for West Indies’ imminent tour of South Africa “for personal reasons” are too strong to be ignored. No less so is the continuing absence from any cricket since June of Kieran Powell.

They are signals that the two left-handers, the most naturally gifted of the current West Indies batsmen, could well be the latest on the expanding list of professional cricketers overcome by the constant grind of global travel and worn down by the need to succeed in a demanding and fiercely competitive professional environment.

The medical term for the problem has evolved from “acute fatigue syndrome” to “stress-related condition” to simply “depression”.

It is the second time in less than a year that Bravo, 25, has opted out of the game to which he has devoted all his young life; the same, unspecified “personal reasons” was the only phrase offered in explanation each time. There has been no stated explanation for the disappearance of Powell, 24, from the West Indies and Leeward Islands teams.

Last December, Bravo quit the tour of New Zealand to go home early; three weeks earlier, his 218 in the first Test was a match-saving innings, the highest of six three-figure scores in his 32 Tests.

He was back for successive series at home against New Zealand in June and Bangladesh in August, and was on the team that created international turmoil with its premature pull-out of the tour of India last month.

On the surface, nothing seemed amiss with Bravo’s game. His sixth Test hundred – 109 in the second Test against New Zealand – was his first in the Caribbean, fittingly at Queen’s Park Oval, his home ground for club and country; his 124 in the third ODI against Bangladesh was his highest score in ODIs.

As is now clear, he was struggling to come to terms with issues off the field. So it is with Powell, whose last innings were 28 and 0 in the first Test against New Zealand in early June, after which he was dropped; he hasn’t been seen on any scoresheet since.

Given the similar experiences of an assortment of cricketers, it was not difficult to speculate what was troubling them.

Brian Lara and Richie Richardson, high-profile former captains who were under more pressure than most in the early years of West Indies cricket’s upheavals in the 1990s, both took time off from the game to evade its stresses.

England’s Marcus Trescothick, Michael Yardy, Andrew Flintoff and Jonathan Trott, New Zealanders Iain O’Brien and Lou Vincent, and Australian Luke Pomersbach are among those more recently affected by. Graeme Fowler, England’s opener of the 1980s, was one of the first to openly acknowledge his condition.

It can’t be known how many others have camouflaged the same bouts of stress. “Depression” is a word that still evokes disturbing images.

In 1995, Lara, already the holder of Test cricket’s record score, left the team during its tour of England, complaining that “cricket is ruining my life”. He was put back on track, principally through advice from then board president Peter Short, team manager Wes Hall and Zimbabwean golfer Nick Price, who could personally identify with his frustration.

Five years later, Lara vacated the West Indies captaincy “after two years of moderate success and devastating failure” under his leadership. He said he would look for assistance from professionals to rebuild his game.

In the six years of his career that followed his return, the tensions remained but Lara’s incomparable batting flourished even more than it had previously. By the time he took his final leave, he had more runs in Tests and ODIs and more hundreds than any West Indian.

Richardson’s crisis was first flagged in 1994 by a doctor in Antigua, who attributed his self-confessed lethargy and inclination to suddenly drop off to sleep as “acute fatigue and mild anemia” and told him to take a month off from cricket. By the end of that English summer, the extent of his ailment was plain.

A joint statement from Yorkshire, where he spent two seasons, and the West Indies board, stated their concern with Richardson’s “health and well-being”, pointing out that a specialist in London had established that he was suffering from “acute fatigue syndrome”. It recommended an immediate rest and break from cricket. Courtney Walsh was installed as caretaker captain on tours to India and New Zealand.

Richardson was back at the helm early in 1995; within a year he announced his retirement following the World Cup in India, Pakistan and Sri Lanka. He was 34. It was an untimely end for a brilliant attacking batsman and trustworthy captain. Significantly, he is currently West Indies’ team manager.

Lara is Bravo’s cousin, 20 years his senior. They were born in the same north Trinidadian village of Santa Cruz. Lara has, inevitably, been a revered role model to his young relation. Bravo’s silken left-handed strokeplay bears the unmistakable Lara stamp.

There can be no one better to relate his own understanding of dealing with the stress of professional cricket.

Powell, a tall, elegant opener, joined the elite West Indian company of Headley, Weekes, Walcott, Sobers, Kanhai, Rowe, Greenidge and Lara with hundreds in each innings in the Test against Bangladesh in Dhaka in 2012. Otherwise, his return from his 21 Tests has been a modest average of 27.48; with West Indies’ present dearth of quality batting he is as much one for the future as Bravo.

Unaffected by their present worries and at their best, both would add to West Indies’ strength in South Africa.

As Lara could advise Bravo in his hour of need, so too can Powell’s father, Carlisle, a former Leeward Islands Cricket Association president, counsel his son, who he primed for his advance to the highest level by enrolling him at Millfield, England’s leading sports school, and lending him strong paternal support ever since.

For all that, it would be better for both to follow the course that Lara took during his second crisis – to seek “assistance from the appropriate professionals to rebuild all facets of my game so as to sustain the remainder of my career”.

On that score, the West Indies Cricket Board won’t be of much help. Its bland statement following Bravo’s decision to shun selection to South Africa read: “The WICB extends its best wishes to Bravo as he seeks to address his personal matters and looks forward to his return to the game.” Quite.