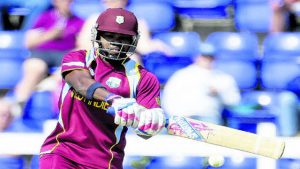 Bravo averages 41 from 42 Tests with seven hundreds, but has not played a Test since last January on the West Indies’ tour of Australia. He was one of the few successes on that dismal tour for the team, scoring 247 runs at an average of 49.

Bravo will once again be expected to carry the burden of the West Indies batting in the four-Test series against the Indians, which bowls off on Thursday at the Vivian Richards Cricket Ground in Antigua.

The Trinidadian is the only West Indies batsman in the top 30 with opener Kraigg Brathwaite lying 32nd, Marlon Samuels 43rd and Jermaine Blackwood, 46th.All three players will have the opportunity to improve their ranking as they are all picked in the 13-man squad for the Antigua Test.

Meanwhile, fast bowler Kemar Roach is the highest ranked West Indies bowler at 21st, with Pakistan leg-spinner Yasir Shah jumping three places to top the bowlers rankings. Roach went wicket-less on the three-Test tour Down Under and is not a part of the squad for the opening Test against India, having just recovered from injury.

He has taken 122 wickets from 37 Tests. Fellow pacer Jerome Taylor, who last week retired from Tests, is 24th while left-arm spinner Sulieman Benn is ranked 26th.