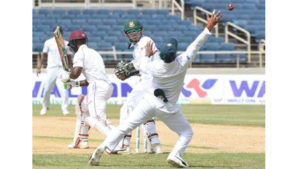 At the close of a sun-drenched day, the hosts, who were sent to bat first, were 295-4 on a pitch with a tinge of green grass cover.

The 25-year-old Brathwaite’s patently stubborn 110 was brought up in 279 deliveries and included nine fours.

Brathwaite, the lone centurion in the West Indies opening-Test win in Antigua, was supported by left-hander Shimron Hetmyer, who hit a breezy 84 not out from 98 balls.

Hetmyer, 21, in only his sixth Test match after last playing five-day cricket for the West Indies away to New Zealand in December 2017, has hit nine fours and a six. He is set to resume today alongside Roston Chase who is unbeaten on 16.

Bangladesh, who deployed three specialist spinners, were led by 20-year-old off spinner Mehidy Hasan, who had figures of 3-90.

Brathwaite said he was not surprised by the grip and bounce that the Bangladesh spin attack was able to extract in the opening exchanges, and explained that the main aim was to march on to three figures after a testing start.

“The pitch had a lot of moisture. Normally, even playing first-class cricket here the first day always tends to spin a lot. I told myself that when I get to a half-century I’ll go big and I worked toward that,” the opener said during a television interview with Danny Morrison.

Before the start, much of the talk surrounded how the pitch would play, and West Indies dropped their wrist spinner Devendra Bishoo and replaced him with Hetmyer. The fourth bowling spot was sealed by debutante seamer Keemo Paul, stepping in for injured Kemar Roach.

Bangladesh showed their hand by adding a third specialist spinner in Taijul Islam in place of pacer Rubel Hossain.

And after the visitors won the toss, chose to bowl, and began with pacer Abu Jayed, the first session saw them examine the West Indies top order through a trial by spin. Captain and slow left-arm bowler Shakib Al Hasan sent down the day’s second over and thereafter it was an almost exclusive spin party throughout the morning.

Shakib and fellow slow bowlers Mehidy and Taijul combined for 33 of the 35 overs delivered in the first session. Seamers Jayed and Kamrul Islam had only one over each during that time.

The ploy paid off early with the ball gripping extraordinarily due to the preparation moisture. Left-hand opener Devon Smith went first, inside edging onto his pad from Mehidy. Short leg fielder Mominul Haque took a straightforward catch, running back.

There was a second success before lunch.

Just after the 50 partnership was brought up between Brathwaite and Powell, the latter played down the wrong line to a delivery from Mehidy that went on fairly straight, and the left-hander was out plumb leg before wicket.

In the post-lunch session, the spinners, though still dangerous at times, did not get the same assistance they had earlier — signs that the sun and strong wind was playing their part in drying the batting surface.

Brathwaite and Shai Hope (29) put on a 79-run stand for the third wicket, but Taijul eventually had the latter playing ahead of his pad. Hope was undone by spin and bounce and the ball ballooned on the off side for wicketkeeper Nurul Hasan to run forward to snare a diving catch.

The pitching gradually flattening out for batting was indicated by the Windies acceleration in the afternoon.

They had pushed on patiently to 164-3 at tea, ticking along at two-and-a-half runs per over, however, the run rate exploded into life in the final session. The home side scored 131 runs in the 27 overs for a rate well over four runs per over.

Braithwate, who picked his moments to attack, escaped on 82 when he was drawn out of his crease to miss a sharply turning one from Mehidy, but Nurul could not gather the ball.

On 98, Braithwaite survived a loud lbw appeal. Seconds later replays suggested the ball hit pad before bat and he would have been given out had Bangladesh opted for a review.

He shook off all that and soon reached the landmark.

However, appearing to tire close to the end, Brathwaite eventually went. Using his feet to power a slog through the leg side, he was caught by Taijul in the short midwicket area off the bowling of the persistent Mehidy.

The positive Hetmyer, who was sometimes too enterprising, also lived a charmed life. He survived a chance on 29 when the diving Liton Das failed to hang on to a very difficult chance at slip off Mehidy.

On 81, Hetmyer was again fortunate when Nurul missed another stumping chance, this time off the off spinner Mohammad Mahmudullah.