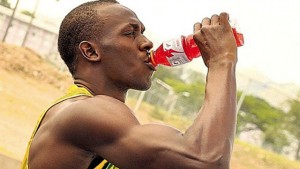 Usain Bolt takes a sip of Gatorade during a promotional shoot in Kingston.

It is so! The United States athletics team were even intimidated by a drink with Jamaican sprint sensation Usain Bolt’s image on the label.

For long, rumours circulated that members of the United States team, which participated in the World Championships in Beijing, China last month, refused to even take a sip of the sport energy fluid Gatorade, all because Bolt advertises the product and the producers of the commodity proudly display the Trelawny-born’s photograph on certain bottles.

Now, the Jamaica Administrative Athletics Association (JAAA) has confirmed earlier talk that the USA squad members flatly decided against even taking a sip.

“That’s a fact. It happened that way,” the JAAA’s Media Officer Dennis Gordon told journalists during a Jamaica Observer Press Club discussion at the newspaper’s offices in St Andrew on Friday.

Teams from Jamaica and the USA stayed at the same Kuntai Hotel in Beijing, approximately one hour from the Bird’s Nest Stadium, and the rivalry spilled over from the track to the hotel, leading to the Jamaicans being called hooligans, Jamaican officials said.

“The hype going into the 100m final suggested that (Justin) Gatlin would have triumphed. On the bus, they were chanting USA! USA! Coming back, after Bolt’s victory, our athletes took them on and were singing ‘We are the champions of the world’, and it never went over well with them,” Gordon pointed out.

Bolt, 29, who is the fastest man in history and the greatest sprinter of all time, had struggled with injury all season leading up to Beijing, while Gatlin went into the championship on the back of a 29-race unbeaten streak and high on confidence of toppling the Jamaican supremo.

For the first time in over seven years a final had been billed as the battle for the soul of athletics. Bolt has never failed a drug test, while Gatlin has twice been banned for doping, so the match-up between the two was dubbed as a showdown between good and evil.

But more importantly, it was Jamaica taking on the mighty USA in yet another battle to determine the true sprinting kingdom.

To Gatlin’s and the Americans’ shock, Bolt won in a nail-biting 9.79 seconds, edging his pretender into second position, just one hundredth of a second back in 9.80 seconds.

While the thousands of spectators were celebrating yet another remarkable achievement for Bolt, Kuntai Hotel erupted in wild celebration from the Jamaicans, who shouted, jumped and cheered.

“The athletes who were at the hotel watching had an outburst and they (Americans) complained that they don’t want to share hotel with us anymore because we are hooligans,” revealed Gordon.

“But the night when (Ashton) Eaton broke the world record in the decathlon, they (the Americans) assembled in the hallway and greeted him with one big cheer and we were not offended,” he added.

“So they said that all the Gatorade that had Bolt’s picture on it, they are not going to drink it. So we said, give it to us. I don’t know what they did, but they didn’t drink it,” said Gordon.

Meanwhile, after a series of interviews in the mixed zone following the 100m triumph, Bolt took his last sip of a bottle of Gatorade and playfully threw the empty bottle in the direction of a Jamaican media worker, and indicated at the same time that the Americans refused to consume the replenishing drink.

A young female Chinese volunteer snatched the empty bottle that the fastest man ever had just drank from. She was ecstatic.

With Bolt winning three gold, Jamaica ended with 12 medals overall — seven gold, two silver, and three bronze — to be second behind Kenya, with the Americans back in third.

The rivalry between the two countries has intensified since 2008 when Bolt and Shelly-Ann Fraser-Pryce became the fastest human beings and Jamaica took over the title as the sprint capital of the world. The Americans have tried unsuccessfully for the last seven years to reclaim the throne.