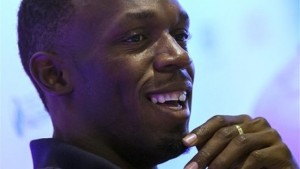 Bolt, who has anchored Jamaica to two Olympic titles and three world golds in the 4x100m relay, missed last year’s inaugural competition in Nassau in an injury-ravaged season. Gatlin was also an absentee.

In last year’s 4x200m relay, Jamaica set a world record of 1:18.63 at the inaugural relays, one of three world records to fall in a truly memorable first edition of the latest addition to the roster of IAAF competition.

And with the bigger goal of the World Athletics Championships in Beijing in August, both sprinters have decided that they will be on show this time around, possibly in both the 4×100 and 4x200m relays.

“It’s going to be serious business for me in The Bahamas,” Bolt said.

“The harder I run the better I’ll get over the races so I have to run hard to get my body used to competing and running hard and just to get into race sharpness.

“I need to get into race sharpness so when I go on the circuit I’m at the best and that’s the main focus.”

Bolt recently ran a 20.20 seconds 200m at a meet in his home town of Kingston, Jamaica.

He will face a 33-year-old Gatlin who last season topped the rankings in both the 100 and 200m, the 2004 Olympic gold medallist who served a four-year doping ban having posted the fastest times in each event, 9.77 and 19.68sec respectively.

Bolt, who acquired his ‘Lightning Bolt’ nickname when setting three records at under-17 level at the CARIFTA Games in the Bahamas in 2002, has been entered for both sprint relays in Nassau.

“I haven’t discussed it with my coach as yet but I would personally want to do the 4x100m and 4x200m just to get runs under my belt to get some sharpness,” said Bolt, who has plans to compete in the 2016 Rio Olympics and the world championships in the United States a year later before retiring.

Two-time world 1500m champion Asbel Kiprop will return to Nassau as the Kenyan team looks to mirror their tally of three wins from the inaugural 2014 event.

Last year, Kenya won the men’s 4x800m, 4x1500m and women’s 4x1500m, dominating both finals and setting world records in the longest event, which has this year been replaced by a distance medley relay.

Importantly, the top eight teams in both the men’s and women’s 4x100m and 4x400m will automatically qualify for the Rio Olympics in 2016.

In addition, the top eight teams in each event will be awarded prize money with the gold medallists bagging $50,000, with a similar amount on offer for a world record.