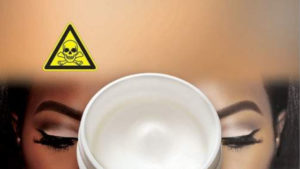 THERE are crucial things that Jamaicans who engage in the act of skin bleaching, to acquire the perfect ‘browning’ shade, do not know — one of which can lead to body dysfunction, medical officials have said.

What many ‘bleachers’ do not know is that creams used to remove melanin in the skin contain mercury, an exceedingly harmful and toxic substance. This, officials said, affects the development of the brain and can cause kidney failure. It can also cause irritable behaviour, memory loss and weak muscles.

The ignorance of ‘bleachers’ is the reason the Medical Physics Research Group at The University of the West Indies (UWI) is conducting further research on skin-bleaching products. The focus is on the mercury concentration of the creams that Jamaicans use.

The project is supported by the Washington DC-based Pan American Health Organization, which gave a grant that was, among other things, used to purchase various brands of bleaching cream.

Speaking with the J amaica Observer recently, lecturer of medicine in the Department of Physics Phylicia Ricketts said, “What we did in the Medical Physics Research Group was to purchase different skin-whitening products that are available in Jamaica and we use our X-ray fluorescence analyser to measure the mercury concentration in these products.”

Ricketts told the Jamaica Observer that the substances are “very harmful”.

“The inorganic mercury now are the ones that are found in our skin-whitening products. Again, those do affect your brain, but it mainly targets your kidney. Persons who are exposed to high levels of mercury from skin whitening ultimately can experience kidney failure,” she said.

One group that needs to be wary of bleaching is pregnant mothers. Not only will mercury affect the mother, it can also have adverse effects on the baby. Research shows that a significant amount of mercury may result in poor neurological development, problems with hearing or eyesight, and other delays.

“Once we publish our data, what we’ll do is provide an advisory … a health advisory for persons, because our exposure is mainly a factor of frequency — how often you use a product and the concentration of mercury in the product. So when we know the concentration of mercury in the products, we can advise persons how often they could use a product and for how long,” Ricketts said.

Researchers described bleaching as slowly becoming an epidemic and want to warn those who engage in the activity of the great risks that they are taking.

Officials argue that bleaching is linked to people with low self-esteem who are ashamed of their black skin colour or who want to fit into a society which often projects citizens of lighter pigmentation as being superior to them.

The ideology that ‘brownings’ are more attractive than black women has been around for centuries, resulting nowadays in people continuing to believe that becoming ‘brownings’ will bring them better opportunities and make them more likeable.

Also argued by professionals who probe why people lighten their skin is the view that the practice gives women the hope that wealthy or ‘money men’ will be attracted to them because they are now ‘brown and pretty’.

The adverse effects, if the application is not done properly, are that skin bleaching can leave people with dark spots, rashes and other blemishes all over their bodies.

The Medical Physics Research Group has tested 60 skin-lightening products already, 16 of which contained mercury. The mercury concentrations ranged from 0.08 ppm (parts per million) to 17,000 ppm, which is considered high. The group highly recommends that individuals read the labels of the products before making the final purchase.

The research group has also urged those who believe that they must purchase creams to refrain from buying products with any of the following ingredients: mercuric iodide, mercurous chloride, ammoniated mercury, amide chloride of mercury, quicksilver, cinnabaris (mercury sulfide), hydrargyri oxydum rubrum (mercury oxide), and mercury iodide.