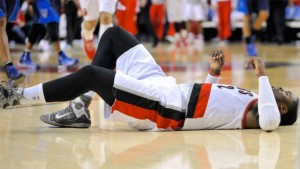 Wesley Matthews injures his left Achilles tendon against the Dallas Mavericks during the second half in Portland on Thursday.

PORTLAND, Ore. — The mood was somber in the Trail Blazers’ locker room following their victory over the Dallas Mavericks. The win had come at a cost, with Wesley Matthews lost for the season because of a ruptured Achilles tendon.

“I make that same cut a hundreds of thousands of times in my life,” Matthews said. “I felt the initial pop. And you guys could probably tell on the replay. I looked back — it feels like someone’s kicked you. I was praying. I was praying someone was back there.”

LaMarcus Aldridge had 17 points and 12 rebounds and the Blazers pulled away in the second half for a 94-75 victory for their fifth straight victory.

But shortly after came the news about Matthews, who had started every game this season. Matthews was averaging 16.1 points and 3.7 rebounds for the Blazers going into the game.

“It’s tough, man. He’s the heart and soul of this team, he brings a lot to this team,” Aldridge said. “I’ve played with him seven, eight years now, so not having him out there is going to be tough.”

Nicolas Batum added 15 points and a season-high 12 rebounds for Portland, which had four players in double figures despite coming off back-to-back games.

Monta Ellis and Amare Stoudemire each had 12 points for the Mavericks, who saw the return of veteran center Tyson Chandler after a three-game absence.

Chandler, who was out with a left hip injury, finished with four points and 14 rebounds.

“This is a difficult matchup, period,” Mavericks coach Rick Carlisle said. “We’ve got to stick together when it’s not going well. We’ve got to fight through this.”

The Mavericks remained without Chandler Parsons, who continues to nurse a left ankle injury that has kept him out of six games so far and should also cause him to miss Friday night’s matchup against the Warriors.

However, the Mavericks said he could make his return Sunday when the team visits the Lakers. In his absence, Dallas continued to lean on veteran Richard Jefferson.

Portland went up 80-63 on Alonzo Gee’s fourth-quarter dunk and Dallas could not catch up. The Blazers were coming off a come-from-behind 98-93 overtime victory against the Clippers in Los Angeles the night before.

“Our defense throughout the game was locked in as far as what we wanted to accomplish individually and collectively,” coach Terry Stotts said about the game. “The defense really spurred our offense in the third quarter and helped us build a lead.”

The teams had kept close throughout the first half. Dallas went ahead 23-17 late in the first quarter on Devin Harris’ short jumper, but couldn’t extend the margin. Charlie Villanueva’s put-back layup gave the Mavericks a 33-28 lead in the second, but Portland pulled in front 38-36 on Matthews’ jumper and led 40-36 at the break.

Early in the third quarter, Matthews was helped from the court.

“I thought out defense was very solid, so if we could ever get our offense going we could make things very difficult for them. But our offense never really got going,” Chandler said.

Dallas was coming off a 102-93 victory at home against New Orleans, paced by Ellis with 20 points.

Portland and Dallas had split the previous two meetings this season.

Mavericks: It was the first of a three-game Western road swing for the Mavs. … Dallas had won two of the previous three games at the Moda Center. … The Mavericks scored just 13 points in the second quarter, a season low.

Trail Blazers: Aldridge made a 3-pointer in the first quarter to snap 20 straight misses from the perimeter. … Portland improves to 26-6 at home. … It was Aldridge’s 30th double-double this season.

Portland remained in third place in the Western Conference, a half-game up on Houston with 20 games to go. The Mavericks sat in the sixth spot behind the Clippers.