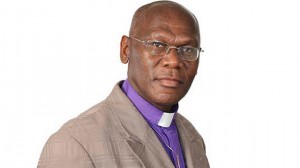 ST JOHN’S, Antigua – The upcoming performance of controversial dancehall artiste, Alkaline, this weekend has raised the ire of head of Christian Ministries Church, Bishop Charlesworth Browne, who said the artiste “will bring decadence and death” to the nation.

Bishop Browne is calling on the authorities to put a stop to his scheduled Black Rave performance at Millers by the Sea on Saturday.

The cleric said he is prepared to call for a boycott of the nation’s Independence celebrations over the upcoming performance.

Alkaline, whose given name is Earlan Bartley, has created an impression with both his lyrics and appearance.

With his bleached, pale skin and trademark pitch black eyes, a feat he achieved by tattooing his eyeballs, the 22-year-old performer turns heads and sets tongues wagging wherever he goes.

Alkaline, who is known for his vulgar and sexually themed lyrics, caused a stir with his onstage antics in his native Jamaica this February, after a female fan jumped on stage and allegedly performed oral sex on him in front of a cheering crowd.

It was perhaps that incident that got him barred from Nevis, in July, as the island’s premier feared the artiste could “incite lewdness” and threaten public safety.

“As a leader in the Christian community, I stand opposed to any performance by this character here in Antigua & Barbuda,” Bishop Browne said. “I believe his performances … are geared to corrupt young people, particularly young women.”

Alkaline is also rumoured to be a Satanist, and some consider him to be following in the footsteps of fellow dancehall artiste Tommy Lee, also known as Uncle Demon.

A member of Diamond Spartans, the team responsible for Black Rave, spoke with OBSERVER media about the controversy and denied the dark rumours.
Bishop Browne said he has spoken with the minister in charge of national festivals, Paul “Chet” Greene about the performance and believes that the powers that be should be sensitive enough to put a stop to the event. He is also calling for a revocation of any signed document that authorises the performance.