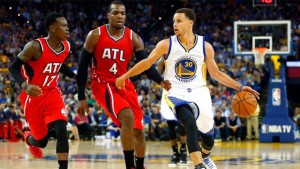 Stephen Curry scored 30 points, Kevin Durant had 28 and Klay Thompson chipped in with 27 as the Warriors cruised past the Atlanta Hawks 128-111 Monday night, snapping a six-game losing streak on the road.

All three stars have scored more than 50 points in a game this season.

This time, they spread the wealth .

“Our defense set the tone,” Curry said. “Everybody gets to touch the ball.”

With Curry scoring 18 points in the opening quarter, this one was never in doubt.

Golden State raced to a 34-17 lead in the first 12 minutes — Curry outscored the Hawks by himself — and the defending NBA champions won for only the fourth time in 10 games.

Playing for the second time since missing 11 games with a groin injury, Curry hit his first six shots, four of them beyond the arc . He finished 6 of 10 from 3-point range

“I think he’s now back in the groove,” coach Steve Kerr said. “He looked great handling the ball.”

The Warriors led 61-47 at halftime and stretched the margin as high as 24 points, sending the rebuilding Hawks to their third straight loss.

“We needed a win on the road,” Curry said. “We kind of didn’t want to give them life.”

Despite the win, Kerr said he’s not pleased with his team’s performance.

“We’re not where we need to be by any stretch of the imagination,” Kerr said. “We’ve been kind of uneven to this point.”

But it was a tough night for Young, the rookie guard who the Hawks are hoping to turn into their Curry-like centerpiece. He had seven turnovers and missed all five of his 3-point attempts.

“I really don’t listen to or care about the comparisons,” Young said. “All I’m thinking about are my teammates and putting them in the best position to win.”

The youngster is struggling with his shot, especially from long range. He’s only connecting on 23.9 percent of his 3-pointers.

“They’re picking me up full court,” Young said. “They’re not going to just sag off and let me have open 3s. I’ve got to find a way to knock them down. I will.”

Hawks forward Taurean Prince could be out for an extended period after spraining his left ankle when he came down on Shaun Livingston while shooting.

Prince hobbled to the locker room in the fourth quarter. Afterward, he headed for home on crutches.

“The X-rays were negative,” Prince said. “We’ll have an MRI tomorrow.”

For Golden State, Draymond Green missed his ninth straight game with a sprained toe on his right foot. He’s expected to miss at least the last two games of a five-game road trip, which ties the longest of the season.

Warriors: Improved to 31-3 when Curry, Thompson and Durant all reach 20 points. … Golden State has won nine in a row over the Hawks, including four straight in Atlanta. … Thompson has scored at least 20 points in nine straight games, the longest streak of his career. … Kevon Looney scored a season-high 14 points . … Quinn Cook picked up five fouls in only 11 minutes.

Hawks: Jeremy Lin returned after missing two games with a sprained left ankle, scoring 14 points and converting a couple of three-point plays after drawing fouls on drives to the basket … DeAndre’ Bembry didn’t have much luck trying to guard Durant, picking up four fouls. … Atlanta had 18 turnovers and went 5 of 26 from outside the 3-point stripe. “We’ve got to value the ball a little bit better than we have,” coach Lloyd Pierce said.

The Warriors star went to the bench after picking up his third foul with 2 1/2 minutes left in the first half.

Kerr strolled over near center court, where Vince Carter was checking into the game for Atlanta.

“A lot of people paid good money to see him play,” Kerr said, referring to Curry.

Curry picked up only one foul the rest of the way, playing a little over 29 minutes.

ROOKIE OF THE MONTH

Young was named Eastern Conference rookie of the month for October and November after averaging 15.6 points and 7.6 assists in the first month and a half of the season.

Despite the accolades, he isn’t satisfied with his performance.

“Personally, I haven’t played the way I wanted to,” he said. “I know I haven’t.”

Warriors: Continue their road trip at Cleveland on Wednesday.