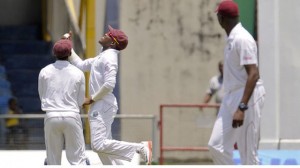 Bangladesh’s middle-order collapse on the third afternoon might have been what Mushfiqur Rahim tried to avoid when he chose to field on the first day. His hopes of trying to protect a brittle batting line-up, a particularly twisted logic considering he had only three specialist bowlers on what had turned out to be a decent pitch, backfired as a giant first-innings score enabled Sulieman Benn to dismiss the visitors for 182 with his fifth five-wicket haul.

After declaring their first innings on 484 for 7, West Indies claimed a lead of 302 runs but their decision regarding the follow-on would be announced on the fourth morning.

Mominul Haque had been Bangladesh’s best hope. But since he was judged caught behind down the leg side on the stroke of tea for a gritty 51, the contest was snuffed out. The stump mic had picked up a noise as the ball passed the bat, but Mominul was swift with his decision to review. Inconclusive replays meant the on-field call was upheld.

With Bangladesh at 105 for 4, Denesh Ramdin played around with his bowling reserves, conjuring two wickets with the part-time spin of Jermaine Blackwood to further Bangladesh’s slide. Mushfiqur was left stranded on 48, while his side lost nine wickets for 77 runs.

Benn generated difficult angles for the batsmen with his high-arm action and did not allow Bangladesh any breathing room, the result of which was eight wickets on the final session.

Blackwood had been deployed as a close-in fielder for much of the innings and began his spell with shin pads on. It was clear that West Indies were trying to get something out of nothing and they did when Mahmudullah was trapped lbw in the second over after tea. This was the batsman’s eighth consecutive Test innings when he had not crossed 30.

The West Indies fielders erupted, and as has happened in the last nine months, Bangladesh wilted. Benn created more chances from his end, bowling three more maidens. Nasir Hossain played out two of those, which forced him to run down at Blackwood and slice a catch to mid-on. It was a strange choice of shot, given that Bangladesh were over 300 runs in arrears with only the tail left, but not quite a surprise.

Shuvagata Hom made 16 off 25 balls, before driving a full-toss back to Benn the bowler in the 55th over. He had added 29 runs for the seventh wicket – the second highest of the innings – with Mushfiqur.

Things had looked far less chaotic during the 62-run third wicket stand between Mominul and Shamsur Rahman. The pair had joined together at 18 for 2 and ushered Bangladesh out of a tough spot with the kind of patience that the lower order lacked.

Mominul got to his fourth Test fifty, though he too was lax outside the off stump early on. He tightened up after lunch, finding the boundary when West Indies erred too short or too full. Shamsur too batted better after edging through third slip’s hands and getting hit on his helmet in the morning. He was out for 35 off 95 balls with five fours while trying to push with hard hands at Benn. Darren Bravo pouched the edge at second slip – his third of five catches.

Bangladesh’s collapse would have pleased Kraigg Brathwaite as well. His innings had set West Indies up for a massive total, but he could add only 7 runs to his overnight 205 before his attempted slog off Taijul was caught at short fine-leg by Mominul Haque. The West Indies opener spend nine hours and 14 minutes at the crease to amass the slowest double-hundred, in terms of strike-rate, in the last five years.

Ramdin had suggested that West Indies could have exploited Bangladesh’s attack better on the second day, prompting Shivnarine Chanderpaul to show a keenness for singles while the rest of the order attempted to hit out. They made 77 runs in 17 overs, but the risks they took also afforded left-arm spinner Taijul Islam a five-wicket haul on debut. Chanderpaul, however, remained not on on 85 off off 226 balls with six boundaries. This was the 34th time he has not been dismissed in 93 Test innings where he has scored more than 50. He was aided by Mushfiqur Rahim when the Bangladesh captain missed a stumping in the 155th over bowled by Taijul.