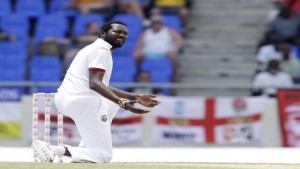 ST GEORGE’S, Grenada (CMC) — Left arm spinner Sulieman Benn has been dropped from the West Indies squad for the second Test against England starting in Grenada on Tuesday.

The lanky Barbadian had disappointing match figures of two wickets for 200 runs in the first Test which ended in a draw on Friday.

Selectors have drafted in Trinidad and Tobago fast bowler Shannon Gabriel, leaving Devendra Bishop as the only frontline spinner in the Windies squad.

The switch from Benn to Gabriel represents the only change to the 14-man squad announced by the West Indies Cricket Board on Saturday.

“We saw a really good display on the final day, which earned us a draw. It was a tough situation, but Jason Holder played really well to get his first Test century and we also saw a courageous effort from the captain (Denesh Ramdin) and Kemar Roach at the end,” said new West Indies head coach Phil Simmons

“We had some good moments in the first match and as a team we will look to improve when we play the second Test. We believe we can win, and we will play to win. We know the areas where we need to improve and what is required to win.”

The second Test starts on Tuesday at the Grenada National Stadium.