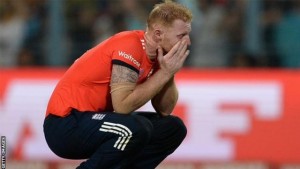 England all-rounder Ben Stokes says he felt as if “the whole world had come down” on him after conceding four sixes in the last over of the World Twenty20 final to lose the game.

With West Indies needing 19 to win, Carlos Brathwaite smashed the first four balls over the boundary to complete a stunning victory.

“I couldn’t believe it. It was just complete devastation.”

But the 24-year-old Durham player believes the setback will make him a better player in the long term.

“Disappointment is the biggest emotion now,” he said. “I remember getting the medal and thinking it’s just a runners-up medal. You don’t want it.

“It will be a little bit of motivation to make sure this does not ever happen again. So train 10 minutes longer every now and again to get better.”

Stokes, who has been backed to bounce back from the defeat by England team-mates including Stuart Broad and Alastair Cook, says he would be prepared to bowl the final over for England again.

“It is something I work at a lot,” he said. “Some days they go well. Some days they don’t. That was a bad day, but I won’t be shying away from it.”

Stokes praised the post-match behaviour of Brathwaite, whom he described as a “brilliant lad”, adding: “We did not have a beer with them afterwards but Brathwaite came up to me and asked for a shirt.

“I wanted to make sure I spoke to them and say well done because I did not want people to think I was bitter. I wished them all the best. It is about respect to the opposition. What happens on the pitch stays on it.”