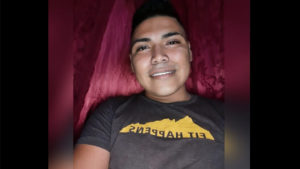 There is outrage in Belize following the death of Derrick Uh who was arrested and allegedly left for hours in a police van and later found dead.

It is reported Uh, 20, a resident of Cristo Rey, was arrested on Sunday at a party around 1 am. According to reports, instead of being taken to the Corozal Police Station, it is alleged he was forgotten in the back of a police van for 14 hours.

He was discovered dead later that day in the van around 3 pm after an officer came across a foul scent.

Prime Minister of Belize John Briceno who described the incident as a tragedy beyond comprehension, said he too like the rest of the nation demands full answers.

He issued the following statement:

“As a father of three sons, I grieve along with the parents and loved ones of Derrick Uh. Based on preliminary information received, his death was a tragedy and a travesty, and I stand with the rest of the nation in demanding full and complete answers.

As Prime Minister, I can assure the family of Derrick Uh, and the nation, that no stone will be left unturned in the investigation of events leading to his death. There will be no excuses taken, and no delays in getting to the bottom of what appears, at this time and without medical evidence, to be heinous and criminal neglect.

I am saddened, appalled and disgusted. We all should be. I extend heartfelt condolences to his family.”

Belize’s Opposition leader Shyne Barrow in a statement said someone must be held accountable for the death of Derrick Uh.

He wrote: “The Opposition offers its deepest sympathies to the family of Derrick Uh in what was a senseless avoidable tragedy at the hands of the State.

We grieve the loss of this son of Corozal who was deprived of his basic human rights and his life in the custody of the State.

The Briceno Administration must do everything to ensure no other Belizean will ever perish while in custody of those charged with protecting our citizens and administering justice.

A thorough investigation must be immediately conducted to hold those culpable of Derrick Uh’s death accountable and prosecute them to the full extent of the law.”

Meanwhile, the United Democratic Party (UDP) has also called for a transparent and impartial investigation into the death of young Derrick Uh.

The UDP in a statement condemned what it described as the gross negligence of his arresting officers that resulted in hours of inhumane torture and eventual death.

The UDP has also extended condolences to the Uh family and friends and offered legal or any other form of support that may be needed to seek justice.

The UDP said: “Fourteen hours, imagine being shackled in a hot prison box for fourteen hours, crying out for help as your life force slowly slips away. Nobody could have heard Derrick’s cry in that dark van on a sweltering summer day.

The National Student’s Union of Belize (NSUB) says it also stands in full support of condemning what it says is conspicuous negligence to the Belize Police Department on the way how such a case was handled and how they perform their duties that led to the death of Derrick Uh.

NSUB states that it recognises that such barbaric actions shouldn’t have taken place from persons whose oath is to serve and protect the people.

It said: “This horrendous dereliction of duty is considered as an act of manslaughter by negligence solely by the arresting officers who were in charge of Derrick Uh and handled the case carelessly without due care and attention. We are in demand of a thorough investigation to bring justice for the death of Derrick Uh.”

The young man’s family members are also calling for justice.

A post-mortem will be performed to determine the exact cause of his death.