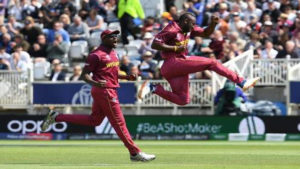 In pursuit of 289 at Trent Bridge, in a contest marked by poor officiating, West Indies were well placed at one stage on 190 for four in the 35th over, but then watched as five wickets tumbled for 66 runs as the Caribbean side paid the price for injudicious strokes late in the innings and ended on 273 for nine off their 50 overs.

Hope top-scored with a patient 68 off 105 balls that included seven fours, and appeared to be steering West Indies to victory, but his demise in the 35th over sparked the West Indies slide, handing Australia their second-straight win of the tournament.

Holder struck 51 off 57 balls with seven fours and a six and hopes of a Windies victory were kept alive once he remained at the wicket. Mitchell Starc’s return for a final spell, however, sounded the death knell, as he knocked over Carlos Brathwaite (16) and Holder in the 46th over to quickly end the Windies bid.

Left-hander Nicholas Pooran struck 40, while Chris Gayle and Shimron Hetmyer both got 21, but West Indies lost wickets at key moments which hurt their run chase.

Tail-ender Nathan Coulter-Nile had earlier struck a career-best 92 and stroke-maker Steve Smith, 73, as Australia recovered from 38 for four in the eighth over to reach 288 all out off 49 overs.

Coulter-Nile, batting at number eight, struck eight fours and four sixes in a robust 60-ball knock which dug the Aussies out of trouble, while Smith faced 103 balls and counted seven fours.

Brathwaite got wickets at the back end of the innings to end with three for 67, while fellow pacers Andre Russell (2-41), Sheldon Cottrell (2-56) and Oshane Thomas (2-63) finished with two wickets each.

West Indies drew first blood in the encounter after choosing to bowl first, unleashing a hostile pace assault on the reigning World champions which left them stunned early in the day.

Thomas produced an absolute beauty to remove Captain Aaron Finch for six to a catch at the wicket in the third over with the score on 15, the right-hander edging a quick length ball which shaped away.

In the very next over, a frustrated David Warner steered Cottrell to Hetmyer at point to fall for three and left-hander Usman Khawaja (13) struck a fierce blow on the helmet by Thomas in the third over, edged Russell for wicketkeeper Shai Hope to take a brilliant one-handed catch diving low to his left in the fifth over.

When Glenn Maxwell top-edged a pull at Cottrell off the second ball he faced, and was caught off a skyer by Hope in the eighth over without scoring, Australia looked in danger of collapse.

However, Smith came to his side’s rescue, first in a fifth-wicket stand of 41 with Marcus Stoinis (19) before adding a further 68 for the sixth wicket with wicketkeeper Alex Carey, whose 45 came from 55 balls and included seven fours.

Stoinis pulled Captain Holder to Pooran at short mid-wicket in the 17th over and Carey feathered a catch to Hope in a new spell from Russell in the 31st over, but Smith combined with Coulter-Nile to further frustrate West Indies in a pivotal 102-run stand for the seventh wicket.

The partnership was ended in the 45th over by a superb running catch at backward square by Cottrell, who raced around the boundary to pluck Smith’s flick off Thomas out of the air. With the momentum taking him over the ropes, he released the ball just long enough to leap back on-field to complete the catch.

In reply, West Indies’ start was less than ideal as they lost both Evin Lewis (1) and Gayle cheaply to be two down for 31 in the fifth over.

The left-handed Lewis edged Cummins to second slip in the second over, while Gayle, who was twice reprieved by DRS after being erroneously given out in successive deliveries by New Zealand umpire Chris Gaffaney in the third over, finally fell to a marginal lbw decision to Starc two overs later.

TV replays revealed the standing umpire had missed a huge no-ball off the previous delivery, however, meaning Gayle should have instead benefited from a free hit.

Hope then repaired the Windies innings in a 68-run, third wicket stand with Pooran before adding a further 50 for the fourth wicket with Hetmyer.

Pooran looked untroubled in his 36-ball innings, which included five fours and a six before miscuing a heave over the top and falling to a catch at point by Finch off leg-spinner Adam Zampa in the 20th over.

Hetmyer, meanwhile, blasted three fours and was just moving into another gear when he was sent back by Hope in a mix-up over a single in the 28th over and was run out at the non-striker’s end.

Hope, who counted seven fours, then combined with Holder to post 41 for the fifth wicket, but his soft dismissal, caught at mid on off Cummins, sparked the slide for West Indies.

Russell blasted two fours and a six in an 11-ball 15, but then unnecessarily holed out to a running catch at point by Maxwell off Starc with West Indies needing just 73 runs off 67 balls.

And all hope evaporated when Brathwaite drilled a Starc full toss to long on and Holder — twice reprieved by DRS after being mistakenly adjudged lbw on seven and 23 — pulled an innocuous delivery to short fine leg off the same bowler three balls later.