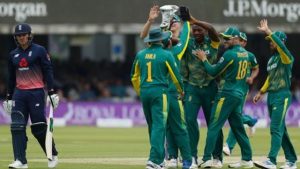 A dramatic batting collapse cost England against South Africa as they lost the final one-day international by seven wickets at Lord’s.

The hosts were reduced to 20-6 after five overs as Kagiso Rabada and Wayne Parnell struck in overcast conditions.

Jonny Bairstow (51) offered some resistance but England were bowled out for 153 with 18.5 overs remaining.

South Africa briefly wobbled after losing Hashim Amla (55) but chased down the total with relative ease.

England, who sealed the three-match series in Southampton on Saturday, put in a valiant performance with the ball – but their batsmen lacked concentration in their final match before the Champions Trophy.

The hosts, who play Bangladesh at The Oval in the first match of the tournament on Thursday, remain the bookmakers’ favourites to secure their first 50-over title.

Although England lost the toss and were asked to bat in conditions suited to bowling, for a side that has scored more than 300 runs in 11 of their past 12 one-day internationals, batting should not have been as difficult as they made it look.

Opener Jason Roy, who has reached double figures just once in his past five international innings, was the first to fall as he edged Rabada to slip – and England’s top order followed suit.

A collapse of four wickets in seven balls, spearheaded by Rabada’s pace and clever seam bowling from left-armer Parnell, meant England made their worst start to a one-day innings at Lord’s.

Successive poor shots, with Jos Buttler and Adil Rashid falling to consecutive deliveries by playing almost identical shots, left the hosts facing an uphill battle by the fifth over.

There is no reason for Eoin Morgan’s side to make sweeping changes before the Champions Trophy, and the collapse at Lord’s seemed to be indicative of a lack of concentration rather than a side in decline.

However, it is a performance England could have done without just three days before the start of an international tournament on home soil.