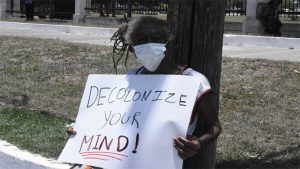 The year is 2022, and Barbadian children are still being told that locs or loc extensions are not acceptable or appropriate for school.

Yet to Barbados’ north, 672 miles away in the same Caribbean Sea lies Anguilla, a country which has taken the decision to amend its National Code of Discipline and Dress, “to reflect the changing attitudes towards hair globally and within our community. This change will outpace most Caribbean territories who still require permission for wearing locs to school.” This is according to Anguilla’s Minister of Education Dee-Ann Kentish-Rogers back on April 13, 2022.

“When I was first elected to office a young man turned to me and asked, how can the Head of the Ministry of Education wear locs, but the students in the system can’t? The truth is that children are watching. They’ve always been watching and they are now finding their voices to express what they believe.”

In neighbouring Antigua, after a Rastafarian child was discriminated against due to hairstyle, in early September 2022, just a few weeks ago, the Ministry of Education in Antigua and Barbuda is now working on a draft policy on hairstyles for schools. But so far, the ministry has made it clear to schools that rules pertaining to hair should be made within the framework provided by the following guidelines:

1. Rules should not discriminate against students based on the natural texture, length or colour of their hair.

a. Clean, that is, free of foul odour and/or contagions.

b. Neat, well-groomed and orderly presented.

a. Pose a health and/or safety risk to self or others.

b. Be a distraction to the general school population.

In Jamaica, provision is made for locs due to religious and medical reasons. Back in 2018, a five-year-old girl was denied an education at a Kingston school because of her locs. Two years later, in 2020, the Jamaican Supreme Court finally ruled that the then principal and school did not breach the child’s rights and upheld the decision to ban her from the school citing hygiene as the reason and cause for concern.

However, Rastafarians could wear locs to school, but not students who would be sporting the style for fashion or personal reasons.

At the time, August 2020, the Office of the Prime Minister in Jamaica reported Prime Minister Andrew Holness as saying: “This Government does not believe that there should be any law which could be interpreted to deny access to a citizen merely on the basis of their hairstyle. We have, as a rights sensitive Government, always maintained that our children must not be discriminated against, nor deprived of their right to an education because of socio-economic issues – such inability to afford school fees, or socio-cultural issues such as their hairstyle.”

Yet today, September 22, a Bajan mother is still confused as to why a teacher verbally told her daughter at an urban secondary school in Barbados, that she could not wear her locs to school after seeing her on the first day of this new term September 19. He told her that she has to have them out by the next day of school.

In a country where the former education minister, now deputy prime minister was appointed initially while having a locs hairstyle, a former DLP Senator wore her hair in a locs hairstyle, the speaker of the House for the last term and current term, who is also a senior member in the legal fraternity has locs, a former Barbados consul general to New York also had locs, and most recently, Barbados’ sole female gold medalist at the 2022 Commonwealth Games has locs, this edict from the teacher to the student has the mother flabbergasted.

Speaking to Loop News, she said that her daughter has been wearing this same style since June 2022 when classes returned to face-to-face. Her teacher has not changed with the new school year, yet this rule is now being brought to the fore.

Her daughter’s hair has loc extensions. The handmade locs act as a semi-permanent to permanent solution to help a person embark on the loc journey while avoiding the fuzzy, untidy stage which can occur with locing.

The mother said that she asked the teacher on the second day of the term to explain the rule and his verbal response was that children cannot wear extensions, weaves etc and cautioned that other teachers may tell her daughter about the hairstyle.

The mother, who is refusing to cut her daughter’s hair, shared photos of her hair on social media in bewilderment without any expectations, but to her amazement, she has since received hundreds of messages from Bajans up in arms on the matter.

Amongst the overwhelming number of responses on social media in less than 24 hours are persons saying that the hair is “neat”, “pretty”, “sweet”, and “tidy”.

Livid, about this situation in 2022 Barbados, one person quote tweeted, “Why can white boys in Barbados grow their hair to their shoulders but black boys have to cut theirs?” This got some 126 likes.

And many took issue with the fact that locs and such hairstyles are frowned upon except in February, which marks Black History Month/African Awareness Month.

Someone tweeted, “What’s upsetting is that February will roll around and they’ll have ‘hair competitions’ and African awareness and all the embrace your roots talks… Then turn around and embrace the archaic colonial rules for hair right after.”

The mum asked if her response was too dramatic. “Am I tripping?” To which someone tweeted, “It’s so sad how colonialism continues to impact us as a country cuz how you mean a black girl can’t wear locs to school in 2022?!? I hope you go to the ministry!”

Many called for teachers and schools to get with the times and understand the culture.

“My friend has two daughters with locs and they wear this hairstyle often …so it could never be the style. And ppl need to learn loc extensions are semi permanent and not to be taken out like braids or faux locs”

“I swear secondary schools be trippin’. We don’t live in 1700s. Get with it. Like nothing is wrong with her hairstyle.”

Some questioned the elaborate updo style, but the mother replied that the issue is the loc extensions, saying the teacher did not take issue with the actual arrangement of the locs. Though on those grounds, she would have acquiesced and styled it differently, she admitted. “But that’s not the issue!”

Editor’s Note: The student, mother, teacher, nor the school have been named in an effort to avoid the student being targeted. Also, please note that loc extensions and faux locs such as boho locs, butterfly locs and crochet locs are not the same.