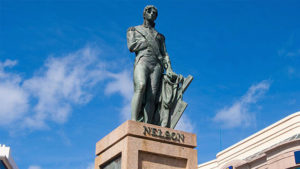 The statue of the admiral, which is more than 200 years old, was located in National Heroes Square, a landmark location that celebrates influential Barbadians.

During yesterday’s ceremony marking the removal of the statue, Barbados prime minister Mia Mottley said: “We are going to ensure … that National Heroes Square must reflect our heroes. And that while we accept that the statue of the vice admiral Lord Horatio Nelson is an important historic relic, it is not a relic to be placed in the National Heroes Square of a nation that has had to fight for too long to shape its destiny and to forge a positive future for its citizens.”

The decision to take down the statue comes in a year when countries around the world are been confronting their colonial pasts and racial injustice.

A number of statues in various countries have been toppled or legally removed in recent times. Authorities, including those here in London, have launched consultations to help them decide what should happen to monuments and landmarks with links to slavery, colonialism and racism.

Although the Barbados government said discussions to remove the Nelson statue date back decades, recent global events and a successful #NelsonMustGo campaign, which drew support from across the diaspora, were also contributory factors.

Barbados’ Museum and Historical Society at The Garrison, St Michael, will house the statue.

The removal of the Nelson statue is one of a number of actions Barbados has announced in its efforts to address its colonial past and how that impacts its present and future.

In September, Barbados announced its plans to remove Queen Elizabeth as its head of state.

“The time has come to fully leave our colonial past behind. Barbadians want a Barbadian head of state,” governor general Dame Sandra Mason said in a speech written by Mottley that went viral.

Reflecting on the link between the removal of the Nelson statue and Barbados’ plans to become a republic, minister for culture John King said in October: “As we amend the Constitution to have a Barbadian Head of State, and as a symbol of the maturity of our democracy, it is imperative that we reexamine notable elements of our colonial past. Cabinet’s decision to remove the statue is part of this process as we seek to promote national identity as part of a modern Barbados.”