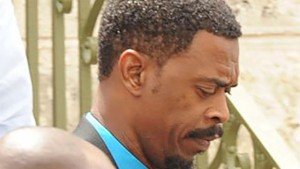 Police Constable Everton Randolph Gittens appeared before acting Magistrate Alliston Seale on Monday afternoon charged with murder and recklessly engaged in conduct which placed Junior Knight, son of the deceased, in danger of death or serious bodily harm and unlawfully wounding him with intent to maim, disfigure or disable him or to cause him some serious bodily harm.

The police officer was not asked to plead since the matters were laid indictably.

Selwyn Knight and his son were allegedly shot by Gittens while they were apprehending Jamal Amal Skeete , who had just broken into their home. Skeete has since been given a two-year jail term.