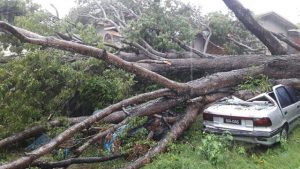 BRIDGETOWN, Barbados, Thursday September 29, 2016 – The all-clear has been given for business to resume as normal in Barbados following the passage of Tropical Storm Matthew which caused flooding and damage in some parts of the island.

While businesses and government departments were given the go-ahead at 5:45 this morning to reopen, and transportation services began rolling out a few hours after the announcement, Deputy Director of the Department of Emergency Management (DEM) Captain Robert Harewood said schools would remain closed.

The system began affecting the island as a tropical wave throughout the course of Tuesday night and into Wednesday morning, with some widely scattered light to moderate showers and occasional gusty winds.

— Mar Gómez (@MarGomezH) September 29, 2016
Conditions deteriorated later in the morning, with some pockets of moderate to heavy showers, periods of rain, thunderstorms and gusty winds.

— Rafael Elliot (@rairizarry) September 28, 2016
But most of the damage came in the afternoon, after Tropical Storm Matthew developed. The downpours caused flooding in some areas.

@BarbadosToday is tracking #TropicalStormMatthew Here’s a video submitted by a fan in the Ealing Grove area. Please stay safe. pic.twitter.com/caicEGE1n3

— Barbados Today (@BarbadosToday) September 28, 2016
Tropical Storm Matthew’s strong winds blew off roofs and downed power lines and trees – some of which fell on nearby vehicles.

There were also power outages in some districts and water was shut off in some areas.

— Barbados Today (@BarbadosToday) September 28, 2016
The inclement weather continued into the evening, but conditions improved into the night, and at 10 p.m. the tropical storm warning was discontinued.

However, the DEM said at that time it would wait until daylight hours to give the all-clear.