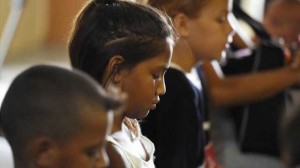 SYDNEY (Reuters) – An Australian mother has been charged with the murder of eight children, seven of them hers, two days after their bodies were found in a home in the city of Cairns.

Police said the 37-year-old woman was charged in a bedside hearing at a Cairns hospital, where she is recovering from stab wounds, with the murder of four girls and four boys, aged from 18 months to 15 years.

“It is simply eight counts of murder, one for each victim,” Detective Inspector Bruno Asnicar told reporters.

Asnicar, who said the five fathers of the children had been informed, said police were investigating whether drug use was involved in the tragedy.

“I want to make clear I’m not dismissing it,” he said. “I’m saying that I can’t discuss whether it’s true or not.”

Police have taken more than 100 witness statements and autopsies of the children, the eighth of whom was a niece of the charged woman, are expected to be completed later on Sunday, Asnicar said.

The killing of the children, whose bodies were discovered on Friday, shocked a nation already reeling from the siege and killing of two hostages at cafe in the city of Sydney earlier in the week.

As services and memorials continued for the victims of the Sydney siege over the weekend, relatives and friends of the children gathered at a makeshift shrine of flowers near their home in the Cairns suburb of Manoora.

Police did not identify the charged woman, citing the need to protect the identity of the children, a normal procedure in Australian criminal cases.

Police also noted that it was culturally insensitive and a breach of cultural protocols of the indigenous Torres Strait Islander community, to which the family belongs, to release the names and photos of the dead children.

Asnicar said police would be releasing less information about the case from now on as the charging of the mother meant it was now before the courts.

“It’s going to be a long hard road” to the bring the case to a conclusion, he said.

The Cairns family were members of the Torres Strait Islander community, a group of indigenous Australians viewed as distinct from the broader Aboriginal community due to their origins on islands off the tropical Queensland coast.