Adam Voges hit an unbeaten 174 and Shaun Marsh 139 not out as Australia amassed 438-3 on the opening day of the three-Test series against West Indies.

David Warner made a rapid 64 as Australia slipped to 121-3, but Voges and Marsh put on an unbroken 317, the second highest Test stand in Hobart. 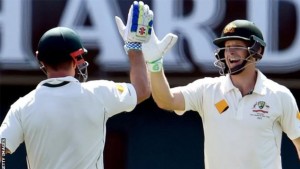 Adam Voges (right) has hit three centuries in his 11 Tests

The tourists’ seven bowlers conceded almost five runs per over on a tough day after Australia won the toss.

Warner and Joe Burns scored 75 in the opening hour before the latter was bowled between bat and pad by Shannon Gabriel for 33.

Smith edged to slip off Warrican, who had Warner caught down the leg side after the left-hander became the first Australian to score 11 half-centuries in a calendar year.

However, Voges and Marsh, who both began cautiously, exploited an increasingly ragged West Indies attack as the day wore on.

Voges beat Adam Gilchrist’s record of 110 balls for the quickest century at Bellerive Oval, while Marsh brought up his third Test hundred off 150 deliveries.

They are closing in on Australia’s record fourth-wicket stand of 336 in Tests against West Indies, by Bill Lawry and Doug Walters in Sydney in 1969.