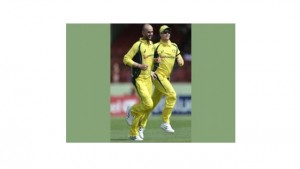 ROVIDENCE, Guyana (AFP) — Australia wobbled near the finish, yet still made an immediate statement in their opening match of the Tri-Nation Series at the Guyana National Stadium yesterday, whipping the West Indies by six wickets in the second fixture of the tournament.

Put in to bat on a pitch that once again made strokeplay difficult, the West Indies collapsed from the relative comfort of 50 for one to be dismissed for 116 off just 32.3 overs, losing the last nine wickets for only 66 runs on the way their lowest-ever total in a One Day International against Australia in the Caribbean.

Australia then wasted little time in getting to the modest target, David Warner stroking an unbeaten 55 to ensure that the scheduled day/night fixture was over with almost 25 overs to spare, despite the loss of three wickets for seven runs with the end in sight.

Spinners Sunil Narine, with two wickets in one over, and Sulieman Benn caused the discomfort, but it was not enough to pull the hosts back from the abyss. The emphatic victory earned Australia a bonus point to move ahead of the West Indies in the three-team standings before Tuesday’s final game at Providence against South Africa.

Boosted by a four-wicket win in the tournament-opener against the South Africans at the same venue two days earlier, the West Indies plummeted back down to earth at the feet of the World Cup holders, whose frontline spinners Nathan Lyon and Adam Zampa did the bulk of the damage with three wickets apiece after the usual effective opening burst from Mitchell Starc.

Playing his first international match for more than six months after being sidelined by injury, the left-arm fast bowler breached the defences of openers Andre Fletcher and Johnson Charles to finish with figures of two for 37 from nine overs. He showed signs of rustiness in delivering five wides and a no-ball; however, his lethal pace proved more than a handful for the West Indies top order.

Starc’s tally of ODI wickets is now at 92 in his 47th match, and should he take eight more before the end of this competition, he will eclipse Pakistan’s Saqlain Mustaq for the record as the fastest to 100 wickets in terms of matches played in this format of the international game.

Charles top-scored with a chancy 22, while all-rounder Carlos Brathwaite was last out for 21, Aaron Finch taking the catch at long on to give Zampa his third wicket.