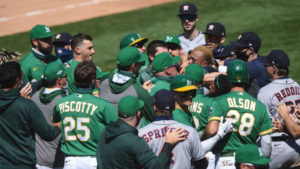 Sunday’s game between the Houston Astros and Oakland Athletics turned into a melee when A’s outfielder Ramón Laureano charged Houston’s dugout after being hit twice by Astros pitchers.

Laureano was hit in the seventh inning, took exception that it happened again, jawed a bit with the Houston dugout then charged in when prompted by Astros hitting coach Alex Cintrón.

After the game, A’s manager Bob Melvin laid more of the blame on the Astros, though didn’t name Cintrón specifically:

MLB will likely come down hard on Laureano and Cintrón. In a coronavirus-plagued 2020 season where social distancing is important to prevent further outbreaks, the league is even less fond of benches-clearing situations like this one.

While this doesn’t, on its face, have anything to do with the Astros cheating scandal, it’s lingering in the air before these two teams as they met for the first time in 2020. A’s pitcher Mike Fiers, a former Astro, blew the whistle on Houston’s cheating scheme. Fiers did not pitch in this series, which ended Sunday.

This is the second time benches have cleared in this young season during an Astros game. Benches cleared in the July 28 game between the Astros and Dodgers when Joe Kelly threw near Alex Bregman’s head and then taunted Carlos Correa. Kelly was eventually suspended eight games.

The A’s eventually won on Sunday, 7-2. They swept the three-game series, running their winning streak to nine games.