Home / Sports / As Team USA wins another gold, Jerry Colangelo urges rest of world to ‘get their act together and compete’

As Team USA wins another gold, Jerry Colangelo urges rest of world to ‘get their act together and compete’ 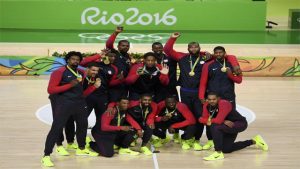 RIO DE JANEIRO – The gold medals were already dangling around the necks of 12 players who had only a month to come together and maintain United States basketball supremacy when USA Basketball chairman Jerry Colangelo came around the podium, avoiding the glare of lime green sneakers, to present some extra swag.

This Olympic journey came with a few bumps – “some BS,” as DeMarcus Cousins put it – for Team USA, so it almost felt appropriate that the celebration also included a blooper.

As he prepared to hand one of the mini-trophies to Kevin Durant, Colangelo watched as the Rio logo atop the base slipped off and shattered on the floor.

Colangelo handed out the rest of the trophies to the players without a problem but ran out when he got to the last player in the line – the guy who was making his final appearance in a USA uniform, Carmelo Anthony.

That little trophy was about all that wasn’t in Anthony’s possession as he left Carioca Arena 1 after his final Olympics. Anthony became the first men’s basketball player to ever win three gold medals and retires from the program he helped elevate from embarrassment as the leading scorer and rebounder in American Olympic history.

No other player from this roster understands the misery of international failure or the pleasure of sweet redemption like Anthony, who was emphatic that he was joining Coach Mike Krzyzewski on the way out of the door.

“I think I’ve given enough to Team USA Basketball,” Anthony said afterward. “As much as I’m going to miss it, it’s time to pass it along to some of the guys who was on our team this year, but also to the younger guys coming along and give them an opportunity to be a part of something great.”

The U.S. Olympic men’s basketball team’s 96-66 obliteration of Serbia was the final stop on a two-week roller coaster ride when it went from looking unbeatable, to vulnerable to indestructible.

The Americans hit a nervous patch in pool play, winning the final three games by a combined 16 points, which exposed some of the problems that can come from the unfamiliarity of having 10 players making their Olympic debut, including six making their international debut.

But after Krzyzewski got a little more familiar with his personnel, he made the necessary adjustments and Durant awoke from an early tournament slumber to help the U.S. quadruple the separation by winning the final three games in the do-or-die phase by a combined 64 points.

With the Americans claiming their 15th gold medal in 18 Olympic Games, with the most lopsided gold-medal victory since the 1992 Dream Team, Colangelo was unusually frank about why a significant gap continues to exist despite the growth of the game around the world and the international talent littered throughout NBA rosters.

“I’m all for raising the bar for global basketball,” Colangelo said. “The more interest in basketball on all levels, I’m for. I’m a lifer of the game. Basketball is the No.2 sport in the world. We just need to see these other countries get their acts together and become more competitive. I’m not going to be making any excuses.

“One of the officials said to me, ‘You oughta play with four.’ I said, ‘No, maybe the other teams oughta get their act together and compete.’ We’ve been helping in basketball around the world for 50 years. We’ve taught the world the game.

Ten years ago it appeared that the level had been raised, with a string of humiliating international defeats between 2002-06. But the program that Colangelo built, Krzyzewski directed and players like Anthony made desirable is so good that it was able to send less than the best it had to offer and still keep alive a 53-game international winning streak dating back to a semifinal loss to Greece in the 2006 world championships in Japan.

Anthony and Krzyzewski shared a podium that night in Saitama, and a commitment that they wouldn’t share that failure again.