Are Carnival tourists safe in T&T ? 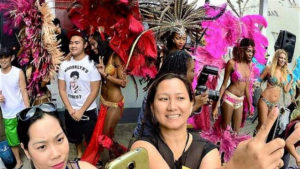 Flashback Carnival 2016: Visit: Japanese tourists take selfies with masqueraders from Island People Carnival band at the Crusie Ship Complex, Port of Spain. Japanese national’s and other tourists were part of a contingent from the cruise ship MS Asuka II which visited our shore

Princes Town Member of Parliament (MP) Barry Padarath is calling to the Government to say whether tourists travelling to Trinidad for the Carnival season will be safe, given the record homicide rate.

Padararth said this did not provide the necessary assurance of their safety potential visitors would be looking forward to.

“The Minister’s comment demonstrates that she and the Government is out of touch with the reality of how Trinidad and Tobago is seen by the outside world and the reality that exist in the country as it relates to crime, compared to other parts of the world.”

He said that while January 2018 continues to be the bloodiest in our nation’s history, the Culture Minister did not address the issues identified in the advisory and instead attempted to give the impression that nothing outside of the norm was happening here at home in relation to crime.

Padarath stated that the big cities the minister spoke of, such as New York, had about two hundred murders less than Trinidad and Tobago in 2017, while they have a much higher population than T&T. He added that in 2017, the largest city in the United States of America recorded 290 murders while Trinidad and Tobago had 495.

“I am calling for a full comprehensive statement from the Government, addressing the issue of the travel advisories against Trinidad and Tobago, with the view of providing a sense of reassurance through actionable plans to make tourist feel safer when visiting.

“I am also calling on the Minister of Culture to acknowledge that the crime situation, especially murders, is affecting tourism, not only for Carnival, but all year through, and should thus frontally address the issues identified in the travel advisories instead of burying her head in the sand.

The Princes Town MP added that in 2017 Trinidad and Tobago found itself in the top ten countries of the world, with the highest homicide rate and that many other countries were looking on at this and were fearful for their citizen’s safety.

Padarath said that statistics have shown that since assuming office the People’s National Movement (PNM) Government has reigned over an upsurge in homicides, murders and serious crime, and added that the Culture Minister’s statement makes absolutely no sense, since locals and foreigners in T&T have to be increasingly vigilant of not random robberies or petty thefts, but rather of being killed.

Padarath called the Government to indicate what steps are being taken to ensure the safety of tourists while are in Trinidad and Tobago.