Apology not enough, politicians should pay for uncouth behaviour 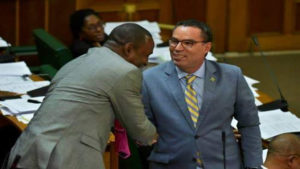 As an organisation of journalists who are today celebrating International Press Freedom Day — a centrepiece of which is the right to free expression — we don’t hold that robust verbal exchanges by politicians have no place in parliamentary life.

What we insist on, however, is responsible, decent behaviour that represents the best of our Jamaican nation and not the gutteresque, uncouth tracing match which shamed all of us last week.

Tuesday’s bi-partisan apology by parliamentarians is the barest minimum that we should expect. All the people involved in that national embarrassment should voluntarily pay a fine of no less than $100,000 each, which should go towards a charity of their choice.

We should include in that Opposition Member of Parliament Denise Daley who apologised for describing her opponents at a party meeting as “green people” and declaring that they were not welcomed in her St Catherine East Central constituency.

And, because we know that they have done this before, they should agree to pay a fine for every time they indulge in this ugly, rowdy behaviour. The Jamaica Labour Party’s Mr Everald Warmington would owe quite a bit, if this were made to be retroactive.

We are not going to be persuaded of the sincerity of their apology unless action of a compensatory nature follows. Sorry just doesn’t make it right. If a fine seems too harsh, the guilty politicians should offer to do some hours of community service.

Leader of Government Business in the House of Representatives Mr Karl Samuda was perhaps a tad over-generous in speaking of “the rich tradition of the institution”, but we are pleased that he extended the apology specifically to “the youngsters who were present and witnessed the type of behaviour that cannot redound to the benefit of the governance of our country”.

We’ve seen robust exchanges in the British Parliament after which our Parliament is modelled. Yet we cannot remember any recent example of such childish carrying on that brought that Honourable House into disrepute.

From the utterances, one gets the impression that some politicians still yearn for the days of old-time political strife, which unfortunately led to bloodshed and garrisonisation.

The real problem for us as a nation is that there are not enough role models of the quality that our young people can use as exemplary examples. Indeed, the boorish nature of last week’s ‘cuss-out’ is the very thing we can least afford.

A country with the high rate of murders and domestic violence that bedevils Jamaica needs leaders who are cognisant of this malignancy that is the main obstacle in the way of this nation becoming its greatest self.

Leadership calls for something extra. Those who want to continue as ordinary people, with no special obligation to act morally, ethically and upright have no place in Parliament.