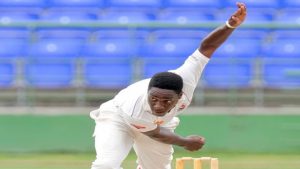 Windies right-arm fast bowler, Alzarri Joseph is now the leading wicket-taker in international cricket in 2022 as of December 9.

The young Antiguan achieved the feat during the ongoing 2nd Test between West Indies and Australia at the Adelaide Oval.

Before the Day-Night Test in Adelaide, Joseph had 65 wickets to his name in 33 matches, Only Cricket 24 revealed.

At the close of play on Day 1, the pacer equalled Nepal leg-spinner Sandeep Lamichhane, who has 66 wickets to his name from 32 matches in 2022.

Joseph went to the top after he castled Aussie Middle order Batter Cameron Green on Day 2.

Cameron Green was then dismissed after scoring nine runs off 42 balls as Australia lost their sixth wicket in the 123rd over with 452 runs on the board.

In 2019, he was signed by Mumbai Indians as an injury replacement for Adam Milne, and in his first game, against Sunrisers Hyderabad, he returned figures of six for 12, the best figures by a bowler in the IPL.

More recently, in 17 ODIs in 2022, Joseph has picked up 27 wickets at an economy rate of 4.61. The speedster didn’t quite have a great time in the first Test at Perth Stadium. Although he scored 43 useful runs in the fourth innings, he failed to pick up a single wicket.

In 10 T20Is for the West Indies team, Joseph has picked up 16 wickets at an economy rate of 7.47 with one four-wicket haul to show for his efforts.