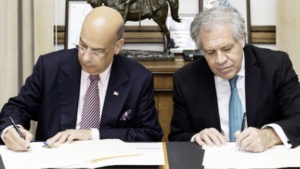 Antigua and Barbuda is the first Caribbean country and the third nation in the Western Hemisphere to ratify the Inter-American Convention against Racism, Racial Discrimination and Related Forms of Intolerance.

The Instrument of Ratification, signed by Prime Minister Gaston Browne, was presented by Antigua and Barbuda’s Ambassador to the Organisation of American States (OAS), Sir Ronald Sanders, to Secretary-General Luis Almagro at a ceremony at the OAS headquarters in Washington, DC Friday morning.

In presenting the Instrument for deposit, Ambassador Sanders observed that “the Gaston Browne administration is in the forefront of efforts to end discrimination based on race, racial discrimination and intolerance”. He recalled the prime minister’s apology last month to the Rastafarian community and the historic occasion at the OAS marking it.

Sir Ronald expressed appreciation to Joy-Dee Davis Lake of the Antigua and Barbuda delegation to the OAS who, he said, “did outstanding work in navigating the Convention through its many difficult stages before it was signed”.

His sentiments were echoed by Secretary-General Almagro who noted Antigua and Barbuda’s pioneering role and the importance of the Convention in specifying for the signatory countries the democratic meaning of the principles of equality under the law and non-discrimination.

Ambassador Sanders said that “it is a matter of pride for Antigua and Barbuda that, small nation though we are, we have done ground-breaking work to advance a legally binding definition of racism, aggravated discrimination, and intolerance.

“The Convention offers protection to all human beings from racism, racial discrimination, and related forms of intolerance in any sphere of public or private life.”

The ambassador praised the 12 nations that have signed the Convention and expressed regret that others, including powerful OAS member states, have not. He urged all countries of the OAS “to join the convention and thereby enhance the rights of all people, particularly minorities and races that have suffered discrimination and oppression”.

The 12 countries of the 34-member states of the OAS that have signed the Convention are: Antigua and Barbuda, Argentina, Bolivia, Brazil, Chile, Colombia, Costa Rica, Ecuador, Haiti, Panama, Peru and Uruguay.

Antigua and Barbuda, Uruguay and Costa Rica are the only three countries that have ratified the convention.